Union Square today displays an extraordinary mania for subdivision. Its ten acres have been hardscaped by fencing and concrete into a multitude of distinct levels and impermeable zones. On the surface, these choices appear self-defeating; the most pedestrian of basic needs—walking a relatively straight path, or maintaining sightlines over even modest distances—are unmet. But, of course, it is all by design. These inconveniences are precisely the goal. Traditionally the site of many of New York’s most contentious public demonstrations, its current layout makes mass protest next to impossible. Union Square is deliberately arranged to stymie the crowd.

Joanna Merwood-Salisbury’s new architectural history, Design for the Crowd: Patriotism and Protest in Union Square, shows that public protest and urban planning have been in conflict in Union Square since formal designs for the plaza emerged in the early nineteenth century. Though the park was unremarkable in form, dimension, and arrangement, its significance to the history of social movements cemented its place in the American landscape. Like London’s Hyde Park, or Cairo’s Tahrir Square, its name has become a metonym for political activism. Union Square, writes Merwood-Salisbury, “expresses, perhaps more than any other urban landscape in the country, how political ideals are realized, imperfectly, in reality.”

Union Square’s importance to labor and radical politics can readily be catalogued. It hosted the first Labor Day parade in 1882, when local trade unionists were cheered by a quarter of a million spectators. Beginning in 1890, annual May Day gatherings invariably culminated with speeches at the plaza. By the turn of the twentieth century, it was the nexus of socialist and anarchist organizing. In 1927, it became home to the headquarters of the American Communist Party. During the 1960s, Students for a Democratic Society located its regional offices there.

Merwood-Salisbury’s most revealing discoveries detail the unpredictable, and often ironic, misalignments that occurred as original design intentions were gradually replaced by new cultural meanings. For instance, architects Olmstead and Vaux originally included a Swiss-style chateau in their 1870s plan for the square. With a speaker’s rostrum, this building was meant to provide a civic platform for democratic debate. During ensuing decades, “the cottage,” as it was known, served as a backdrop for an increasingly militant series of immigrant orators. The structure appears in period photographs, its ornate Teutonic timbers incongruously bedecked with placards in Yiddish and Russian proclaiming an end to capitalism, imperialism, and war. By the 1930s, the building’s revolutionary past led the Parks Department to replace it with a politically neutral neoclassical pavilion. It provided a public bathroom, but—pointedly—no place for public speaking. At the opening ceremony for the new building, speakers promised that it would be a “center of true Americanism … and not to be associated with radical activities.” This structure, created as a reactionary deterrent to protest, had by the 1990s been transformed by neighboring residents into a symbol of community. When the Union Square Partnership, the city’s first business improvement district, attempted to turn it into a café, residents fought back, embracing it “as a much loved and untouchable public amenity.”

Because Union Square figures so prominently in American labor and radical traditions, others have already discussed the historical events that appear in Design for the Crowd. Merwood-Salisbury revisits testimony and reportage that numerous scholars have previously examined, and too much of the book recounts well-known episodes without directly connecting them to the theme of architectural design. Ideally, this book would have spent more time linking the significance of design with the events that occurred in the plaza; too often, those themes are discussed successively without ever being fully integrated. 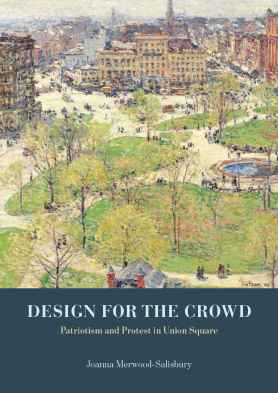 But Merwood-Salisbury persuasively argues for the value of considering physical design alongside the history of place and politics. “When it comes to systems of regulation,” she writes, “the mechanisms of control are many; they include not only laws and police practices, but also the material arrangement of a space: its shape, enclosure, access points, and internal components. In other words, its design.” Having made this case, however, she does not fully articulate specifically how Union Square’s design and architecture shaped the sorts of political happenings that occurred there. Here’s my attempt to do so: Though the present Union Square has been partitioned and designed to prevent large protests, for most of its history it offered a more or less unencumbered plaza. This openness lent itself to particular kinds of mass event. Unsuitable as the route of a protest march, nor defensible enough for barricades, Union Square served as Gotham’s Field of Mars. It was able to accommodate the circulation of parades on review, contain tight-packed gatherings at monster mass-meetings, or could—at key and horrific moments—instantly be transformed into an open battlefield and cavalry ground.

Such a cataclysm occurred in April 1914, when police on horseback spurred into a large crowd of unemployed workers. “The officers fought coldly, contemptuously, systematically, shoulder to shoulder and elbow to elbow,” a horrified reporter wrote. “The yells of defiance, the curses, the screams of pain from men and women, the clacking of galloping horses, the curt orders from police commanders made a chorus which overwhelmed the ordinary song of the streets.”[1] More than any number of choreographed May Day marches it was these volatile and destabilizing scenes of bloodletting, repeated decade after decade, that enshrined Union Square as radicalism’s home in America.

Thai Jones is the Herbert H. Lehman Curator for American History at Columbia University’s Rare Book & Manuscript Library. He is the author of three books, including More Powerful Than Dynamite: Radicals, Plutocrats, Progressives, and New York’s Year of Anarchy (2014).

4 thoughts on “Stymieing the People: A Review of Design for the Crowd: Patriotism and Protest in Union Square”