At the end of the First World War, influenza swept across the globe killing fifty million. But this, the deadliest pandemic in history, has never been given the prominence of say, the bubonic plague, cholera, or AIDS. The Mütter Museum of medical history has now launched a most welcome, and what promises to be long-running, exhibit documenting how during 1918-1919 the disease spread through Philadelphia, the hardest hit American city.

The perfect storm of infection began with the city’s Fourth Liberty Loan Parade on September 28, 1918. Infected sailors who had come to the Philadelphia Navy Yard from Boston earlier that month were now marching in the parade. Here was the match to tinder.

The disease spread very quickly through crowded immigrant and segregated black neighborhoods. The city had enjoyed an employment boom in shipbuilding, munitions, and steel allowing African Americans from the South and immigrants from Southern and Eastern Europe to find work in those booming war industries. But the workers were often obliged to live in the Seventh Ward with its overcrowded and wretched housing.

Though the epidemic took a particular toll on the poor, well-to-do neighborhoods were not spared. And to an unusual degree, this influenza strain victimized vigorous young people in the prime of life. Lack of trained medical personnel—many called into service because of the war—made it difficult to cope with the spreading infection. The dead piled up to the point where many had to be buried in shallow graves. 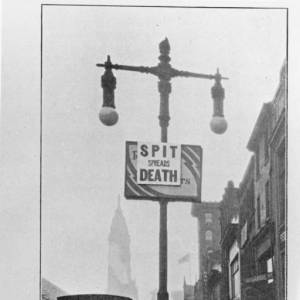 What makes this exhibit particularly compelling is not simply its concern with epidemiology, but with its ability to capture the rippling effect of a single death. When someone dies a family may be torn apart; a husband becomes a widower, a mother a widow, a child sometimes an orphan. How are survivors sustained? How is the social fabric repaired? The exhibit helps us understand in very human terms the consequences and costs of devastation.

What makes this concrete, aside from the pictures of mass burials, is a bin full of copies of death certificates of men, women, children who were struck down as the flu ravage their neighborhoods. So one can read the details of Mrs. Olive Allen, a widow, who died Oct. 18th at 7:15. She had worked as a clerk at Western Electric.

The Mütter, a small museum, has mounted a nicely conceived and executed show which provides a wealth of information and insight. The museum also sponsored or was part of a series of programs including the parade, held on Sept. 28th, re-enacting the Liberty Loan procession from which so many were infected. Additional programs, such as a flu vaccine clinic, were also held as part of this multi-layered act of remembrance. A vaccine was eventually developed but it was too late for the many who died. Today there is still a constant need to monitor how the flu virus changes every year to allow for timely development of the appropriate vaccine.

It is still not too late to get your flu shot. And if you get the chance, get over to that admirable show at the Mütter Museum.

Bob Carey did his undergraduate studies at Wesleyan University in Middletown, Connecticut (’61); read for degrees in theology at Union Theological Seminary in New York City (’66, 68), and did his doctoral work in American history at Columbia University in New York City (’84). He served as an Assistant Pastor at Dr. King’s Ebenezer Baptist Church in Atlanta in the ‘60’s and has been a faculty member of Empire State College since 1973, retiring in 2018. He has served as an Associate and Graduate Dean in the course of his career with the College. His areas of interests in Historical studies are America’s racial and religious history, the history of food and disease and critical reading.