In this, our first book review in a new series edited by Jim Wunsch, UHA President Richard Harris tackles an epic historiograpical effort by Alan Mayne. 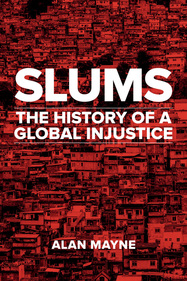 More than ever, we need broad syntheses that bridge the specialized literatures in which most of us spend our time. That is one reason why Alan Mayne’s Slums. The History of a Global Injustice is so welcome. Another is that, by whatever name, slums have been a significant element in the modern urban experience, the object of much planning, policy, and writing.

Mayne builds two big bridges. The first connects the extensive body of work on slums in Anglo-America with the even more abundant literature on those in the global South. The second links past and present, in a survey that extends from the 1810s to the 2010s.

He moves between thematic and chronological treatments. Early chapters dissect the definition, connotations, and uses of ‘slum’. He then considers its influence on policy in Anglo-America through the 1960s, before turning South, where ‘slum’ has been “orientalized”, in the colonial, early postcolonial (1940s-1970s) and more recent periods. Since the 1970s, U.N. and World Bank policy has globalized thinking, whether for slum clearance, upgrading, or neoliberal market reform. His strongest criticism is of clearance programs but, although he prefers upgrading, he argues that even these usually fall short because they fail to “partner” with local residents (287).

Mostly, Mayne focuses on how areas have been (mis)represented, rather than the places and people themselves. The exception is a late chapter where he considers how residents have lived, made a living, and built community. His theme is the “slum deceit”: how the stereotype oversimplifies, implies that residents are deficient, overlooks their contribution to the urban economy, and justifies “coercive intervention” (10). Yes, he says, ‘slum people’ are poor, live in deficient housing, lack municipal services, and feel ambivalent about their neighbourhoods and also the ‘slum’ label; and yes, some policies have been well-intentioned (196-199). But, he argues, none of this justifies the use of ‘slum’, and the “warped ‘reform’ agendas” that it encourages (199).

His critique of ‘slum’ could use more nuance. Not all substandard areas can be saved. Upgrading projects have usually, and even clearance has occasionally, done some good. Although clearance has had a higher profile, unobtrusive improvement (including basic servicing) has surely been more common than Mayne suggests, and certainly more than the index indicates. Overall, his dissection of the rhetoric could usefully have been judged with closer reference to the reality.

Those who know London in the 1880s or Delhi in the 1950s will inevitably find something to quibble about. There are geographical biases. In the South, we hear a lot about India, something about Latin America and sub-Saharan Africa, but little elsewhere. And Mayne overlooks early bustee and kampong improvement programs in Calcutta (1880s) and the Dutch Indies (1920s). But, given the available historiography, gaps are inevitable. This survey and sustained critique, a life’s work, is the first of its kind. A complement to Carl Nightingale’s Segregation, it makes principled connections across time and space. Anyone interested in slums should check it out.

Slum: A building or area that is deteriorated, hazardous, unsanitary, or lacking in standard conveniences; also, the squalid, crowded, or unsanitary conditions under which people live irrespective of the physical state of the building or area. The latter definition is a deviation from the standard meaning, which puts emphasis on physical conditions. At three persons per room, however, even sound housing is a slum. A neighborhood may be physically sturdy, but if it is devoid of good transportation (as in Watts, Los Angeles) it could be classified as a slum. If the neighborhood school is a disgrace, the best cosmetic treatment of the housing will not eliminate its slum aspect.

The word ‘slum’ is a piece of cant of uncertain origin, little more than a century old. Slum reveals its meaning the moment it is uttered. Abhorrence of slums has often led to reckless destruction and more than once contributed to severe housing shortages. (See BLIGHT; GRAY AREA.)

Featured image (at top): “Children in slum area, Washington, D.C. Children in their backyard in a slum area near the Capitol. This area inhabited by both black and white”, photograph by Carl Mydans, November 1935, Prints and Photographs Division, Library of Congress

One thought on “Book Review: Slums by Alan Mayne”