By Seth Weitz On January 16, 1989, Miami police officer William Lozano shot Black motorcyclist Clement Lloyd, killing both Lloyd and his passenger, Allen Blanchard.  The shooting sparked several days of riots and brought to an end a tumultuous, but transformative, decade in Miami’s relatively short history. Dubbed the 1989 Miami Riots, they marked the […]

Brett L. Abrams Senior Archivist National Archives and Records Administration Describe your current research. What about it drew your interest?  I am examining the role of visual arts in the development of Washington, D.C. during the twentieth century. My previous books examined the intersection between popular culture and urban history. Hollywood Bohemians looks at transgressive […]

Distinguished urbanist Matthew G. Lasner of Hunter College recently completed his term as Exhibitions and Media Bibliographer for the UHA newsletter, and in his outgoing comments he shared some wry and accurate advice with editor Hope Shannon: “I’m certain far more of our members would be interested in digital projects, new websites and tools, etc. than […]

By Kevin D. Seal This is a picture of an authentic Sacramento Kings jersey that I bought in middle school. I walked to the NBA Store on Manhattan’s Fifth Avenue during a free period, pulled Chris Webber’s jersey off the rack, and handed over a silly amount of cash for the right to have it […]

Until I read Barbarian Days: A Surfing Life, William Finnegan’s Pulitzer Prize-winning memoir of his life as a surfer, I had little desire to visit Hawai’i. Like Ryan, my impression of the islands was drawn largely from Hollywood films and television, and reinforced by friends’ honeymoon photo albums on Facebook. Seen through these lenses, Hawaii […]

There is something undeniably charming about the Honolulu Airport’s late 1950s/early 1960s aesthetic. I’m not sure about smelling “tuberose and plumeria” upon arrival as one writer promised, but that might be because I don’t actually know what either of those scents smell like. I do know that the airport’s baggage claim area has distressingly low ceilings […] 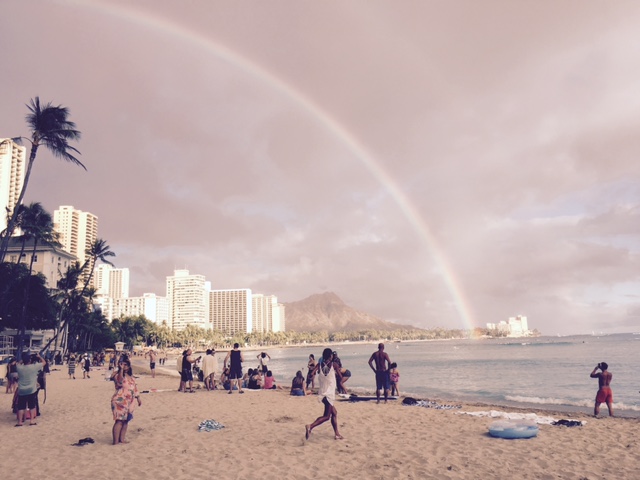 “It’s a cosmic irony that the longest, most grueling nonstop in the United States ends in the sweetest arrival of all,” Jocelyn Fujii, Hawaiian native and New York Times writer, wrote in a recent edition of its 36 Hours travel book series. Travelers will inhale the smell of “tuberose and plumeria” in the Hawaiian air, […]