Detroit once meant cars, speed, and movement. In his new memoir Motor City Music, Mark Slobin takes us on a leisurely, unconventional ride through the city, telling the story of growing up and being shaped by the musical mix and cultures in what can now be considered Detroit’s golden age—its becoming “Motor City” in the early twentieth century, hitting full stride during World War II, and the last flash: Motown in the 1960s. For Slobin, Detroit’s lasting gift was not the “Model T,” but a musical culture that nurtured and sustained a great city and which in turn “animated America with music that was propulsive, exciting, and influential.” 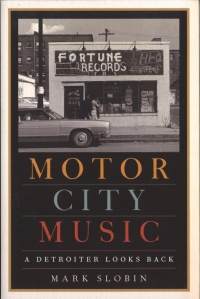 Motor City Music focuses on the coming of immigrants from Southern and Eastern Europe, followed by the rural poor, whites and blacks, who settled in neighborhoods where their musical cultures took root. Singing, dancing, and playing their songs, newcomers from overseas and from the hinterland become the featured players in Slobin’s drama of musical development and demise.

Detroit was a magnet, pulling workers into the huge General Motors, Ford, and Chrysler works that dominated the landscape. The great stream that would become Detroit’s musical tradition was fed by several tributaries. Jewish immigrants with their Yiddish music tradition were joined by other Eastern Europeans who collectively established not only an ethnic music scene but also orchestras and ensembles, which could deliver masterpieces from the classical and especially Romantic repertoire. Next, African Americans migrating from the South brought blues and gospel, while from Appalachia came poor whites with bluegrass and songs of loss and longing.

Slobin’s Detroit could be any northern industrial city, deeply segregated by race, but also by ethnicity. It drew thousands who hoped to find work, an opportunity to start over, and perhaps, to breathe a bit more freely. Slobin explores how and where different ethnic groups moved within the city with particular concern to older neighborhoods which over time would come to attract devotees of the club scene and ethnomusicologists.

How was neighborhood music spread? Crucial to Detroit’s bubbling musical culture was a vigorous public school music program at the high school level exemplified by Miller High, all Black, and Cass Tech, a magnet school with a richly staffed and equipped music program. Gifted students from both schools, thanks to the dedication and talent of the teachers, could go on to successful careers as musicians in spite of the persistence of segregation. Teachers nurtured emerging black musical forms as they did Appalachian traditions that were beginning to undergo change, finding voice in union protest songs and the work of Arlo Guthrie and Pete Seeger.

Next came the radio, the great dispenser of popular culture and eventual incorporator of outlying traditions. The rapidly changing technology of recording stirred the pot as forms evolved and took hold. In each of the chapters detailing these changes, Slobin shows how traditions—ever changing and adapting—and evolving technology created a vibrant musical culture in Motown.

At first, European classical music was understood to be the tradition that mattered. The main impetus for sustaining that tradition came from a largely Jewish European immigrant community. Music lessons, particularly with the violin, the symbol of cultural literacy in Jewish households, were taken for granted in Slobin’s youth. So too was literacy in folk and ethnic musical traditions. Jews were notably active in helping to found and support the Detroit Symphony Orchestra.

Other traditions, from the African American and Appalachian white communities were initially outliers from the perspective of the European tradition. But jazz, bebop and other forms—think Aretha Franklin—grew apace and thrived in the club culture of the city. Bluegrass and country did too, during the 1960s. Recording companies abounded in Detroit, making it easy for anyone raised in one musical tradition to sample and fall in love with others. In Slobin’s telling, it was these latter traditions that stamped American popular musical culture with a distinctive sound that continues to this day, connecting with what took shape in the glory days of Detroit innovation. Motown was the dazzling symbol of that tradition, capturing what had been nurtured in the clubs that would, in time, be destroyed as urban development plowed under Black communities.

At its peak in the 1950s, Detroit’s population reached nearly two million. By the 1970s, suburbanization and industrial relocation had taken a toll as the city was hollowed out, becoming become a shell with a shrunken tax base and little hope.

But Slobin takes us back to a time before all that, when Detroit burst forth with a musical culture that reflected a remarkable mix of performance and innovation. In his last chapter, “City in the Rearview Mirror,” he bids farewell to a city that set an incredibly rich musical table for him—and for us.

Bob Carey did his undergraduate studies at Wesleyan University in Middletown, Connecticut (’61); read for degrees in theology at Union Theological Seminary in New York City (’66, ’68); and did his doctoral work in American history at Columbia University in New York City (’84). He served as an Assistant Pastor at Dr. King’s Ebenezer Baptist Church in Atlanta in the 1960s and has been a faculty member of Empire State College since 1973, retiring in 2018. He has served as an Associate and Graduate Dean in the course of his career with the College. His areas of interest in historical studies are America’s racial and religious history, the history of food and disease, and critical reading.

Featured image (at top): During the 1960s, industrial and white flight to the suburbs and the Sunbelt began to crack Detroit’s façade of middle-class economic mobility. (Gcosserat, “Detroit, 1964,” Flickr)