The pervasive effects of the coronavirus have forced numerous public history institutions to rethink their mission and the means by which an organization might still work toward long held goals in a radically different environment. Celebrating its 60thanniversary this year, Baltimore Heritage serves as just one example of this phenomena, as the historic preservation non-profit nimbly adjusts to the challenges presented by the current pandemic. Its director, Johns Hopkins Jr., sat down with us virtually to discuss the challenges facing the organization and its plan for the future.

Baltimore Heritage is celebrating its 60th anniversary this year. During this time, how has the organization changed? Have its ideas regarding historic preservation as both a concept and mission also changed over the past six decades?

Baltimore Heritage was founded to preserve historic buildings and neighborhoods in the wake of urban renewal policies that were demolishing wide swaths of historic neighborhoods and clearing other neighborhoods for roads and highways. Our mission has not changed much in the intervening sixty years. Our focus is still on saving historic places from demolition and helping historic communities revitalize. Interestingly, from the very beginning Baltimore Heritage worked equally in predominately white neighborhoods and predominately black neighborhoods, and this also has not changed. One area that has changed is that sixty years ago the fight was to prevent historic places from active demolition by wrecking ball. Today, much of the focus is preventing passive demolition by neglect. There are tens of thousands of historic buildings in Baltimore that are vacant and abandoned, and addressing this issue is central to both protecting historic architecture and revitalizing historic communities.

Obviously, ringing in your 60th anniversary with a deadly pandemic is not ideal. How has Baltimore Heritage adapted to the current situation?

In April our governor issued stay at home orders. This was the beginning of our spring heritage tour season, the most active time of the year for our education programs. It is also when we earn close to one-third of our overall operating budget each year. The coronavirus shut this down entirely. We responded the same day as the governor’s orders by launching a new program called Five Minute History Videos. Perhaps foolishly and certainly naively, we said that if we are not able to do in-person tours, we’d do a virtual tour of a different historic place each day. Baltimore Heritage has two staff, and neither one had a lick of experience with producing videos, but in we jumped. The videos are Ken Burns-style, with Baltimore Heritage’s director narrating about each place and his fifteen-year-old daughter filming with an iPhone in their living room (remember, we’re on lockdown). The organization’s outreach coordinator then takes the videos, finds historic and contemporary images for them, inserts them, and posts the videos on our website and YouTube page. Miraculously, each video is getting between 1,000 and 2,000 views, allowing us to reach a much broader audience than we did with our in-person tours. Retirement communities are streaming them, people busy with jobs and families are “sneaking” them in between tasks, and people are forwarding them to friends and family as far away as Australia. We are learning they are a way to get people who have a connection with Baltimore more engaged, no matter where they are living or how able-bodied they are. And even though the videos are free, kind viewers have sent in contributions that more than double what we had expected with our in-person tours. We plan to start in-person tours back up in the fall, but definitely will keep producing virtual tours indefinitely.

Beyond the pandemic, what are the biggest challenges facing historic preservation in the digital age and what are Baltimore Heritage’s plans for addressing them? Are any of these challenges unique to the city?

Our biggest challenge will be continuing to try to address disinvestment in our historic neighborhoods. Baltimore City today has nearly 20,000 vacant buildings, the vast majority of which are inside historic districts. We have spent the last decade addressing this with programs to engage residents in positive ways around historic public places (e.g., movie nights in historic squares), by raising money for rehabilitation projects, and by participating with city and state partners in revitalization strategies that include both demolition and reinvestment. We are committed to continuing and expanding these as we move through the pandemic.

Over the past few years, Baltimore has seen protests and civil unrest. This year’s protests over George Floyd and Breonna Taylor, among other victims of police brutality, seem to be an extension of the earlier protest and unrest that followed the Freddie Gray tragedy. How does a historic preservation organization engage these issues? Are there ways to connect today’s protest with similar uprisings in the city’s history?

As an organization, we are proud to be on the front lines addressing systemic racism, correcting false Lost Cause narratives, and helping Baltimoreans learn the histories behind memorials that continue to cause pain. We issued a statement on public memorials that goes beyond Confederate symbols and are working with members of the Baltimore City Council to put in place a structure to facilitate dialogue and solutions to our memorials.

Our mission is preserving historic places and revitalizing historic neighborhoods, and this rests on telling full and accurate histories on topics that matter to people. Richard’s work fits both goals perfectly. Virtually every resident of Baltimore knows that people were enslaved here and bought and sold here, but without any physical remains of the slave trade, virtually nobody knows any specifics: where were the sites, how many people were involved, when did slave trades end. As we in Baltimore are hopefully beginning to address these and other dark issues, we as an organization can contribute by helping people start with accurate history.

If someone had only 24 hours to spend in Baltimore, what three historical sites or activities would Baltimore Heritage encourage for that person to visit or participate in as a means to best grasp the city’s long history?

Tough question, but here it goes: 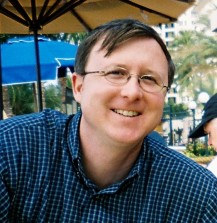 Johns Hopkins Jr. is the director of Baltimore Heritage, Inc., a non-profit organization that works to preserve and find new economic uses for Baltimore’s historic buildings and neighborhoods. Johns previously helped create and was the director of the Maryland Building Rehabilitation Code Program, within the State of Maryland’s Department of Housing and Community Development. The “Smart Codes Program,” as it is called, streamlines government regulations to encourage investment in older buildings and neighborhoods. Johns also teaches a class on environmental law and regulation in Towson University’s Environmental Science and Studies graduate program. Johns serves on the board of directors of Civic Works, Inc., Baltimore’s youth training and neighborhood revitalization corps, the Garrett Jacobs Mansion Endowment Fund, the Coppin Heights Community Development Corporation, The Friends of Clifton Mansion, a non-profit group that is working to restore the summer home of the benefactor of Johns’ namesake university and hospital, and GreenMount School where his two young children attend.