The Code is the book I wish existed in March 2000, the month I moved to San Francisco from Philadelphia, a dissertating history graduate student amid a sea of IPO-chasing techies and newly minted MBAs. It was the height of the dot-com boom (quite literally: the tech-heavy NASDAQ index hit its highest point the same week we signed the lease on our apartment). Everyone wanted to be a millionaire, so assured in their conviction of near-term success that it occasionally made me question my life choices.

The wealth tech produced was obvious, but the industry itself was mystifying, as foreign to me as the fact that it was near-impossible to find a restaurant in the city that served dinner past nine p.m. Both a political historian and an urban historian, I was largely untrained in the historiographies of science and technology. Yet here I was, amid the dot-com froth, embarking on a dissertation about universities, tech, and suburbs in the early Cold War.

I managed to assemble a small shelf of books on Silicon Valley—including Annalee Saxenian’s comparative study of the Valley and Boston’s Route 128, Regional Advantage (1996), still terrific a quarter-century on—but none provided a full picture of how this place and industry fit into the broader narratives of modern American social, political, and urban history on which my graduate training had focused.

By the time that dissertation became my first book, Cities of Knowledge (2004), the dot-com bubble had popped and my husband and I were relocating to another high-tech capital, Seattle. At the time, we did not expect that the move would be long-term, nor did I expect that I—still thinking of myself as more of an urban historian than anything else—would continue to make the technology industry the focus of my work.

But sixteen years on, here I am amid the evergreens and drizzle of our adopted home, having just published the history of Silicon Valley I wished had existed when I arrived in San Francisco twenty years ago.

The Library of Congress may categorize The Code under the “business enterprise” subject heading, but it’s as much of an urban history as anything I’ve written. For one, it is an urban biography, the history of the place and its people from the 1940s to the present day. But more fundamentally, its animating questions and ideas are ones with which I was taught to grapple as a graduate student at that great training ground for urbanists, the University of Pennsylvania, where three of the best—Michael B. Katz, Thomas J. Sugrue, and Lynn Hollen Lees—made up my dissertation committee.

The late 1990s proved a particularly glorious time to study at Penn. Michael, my advisor, pushed me from my first semester to take courses not only in history but beyond: urban sociology with Douglas Massey and Ewa Morawska, urban finance with Robert Inman, and city planning with Anne Whiston Spirn. Those courses, along with the urban studies graduate certificate program that Michael helped establish, gave me foundational, and remarkably interdisciplinary, training in urbanism.

Set largely in metropolitan Northern California but also in Washington, DC, New York, Boston, and Seattle, The Code is the product of what Michael described as “the spatial turn in urban history” in his 2015 essay in The Journal of Urban History (published posthumously in a special issue devoted to his urban scholarship).[1] Like other urban and metropolitan histories coming out of that spatial turn, my book uses multiple frames to interrogate a question that long has entranced scholars and economic development officials alike: why and how did a sleepy, mostly agricultural valley transform into the global capital of the technology industry?

The answer is institutional, having to do both with the presence of research universities and military installations and contractors. It is political, having been set in motion by Silicon Valley’s first great venture capitalist, the federal government and its extraordinary expenditures on scientific research and development, especially in microelectronics and communication devices, in the first two decades of the Cold War. It is demographic, catalyzed by the great Sunbelt migrations of the postwar period and particularly by the growing cohort of college-educated, and Baby Boom-era engineers produced by massive federal and state investments in higher education. And it is spatial, a product not only of the mass suburbanization of the postwar period and the Sunbelt geography of defense spending, but also of the transformation of metropolitan space in the post-1970s. A period distinguished by new immigration patterns from Asia and Latin America, growth-control and land use planning, transportation and transit networks, and flows of ideas, capital, and people between cities across the globe. 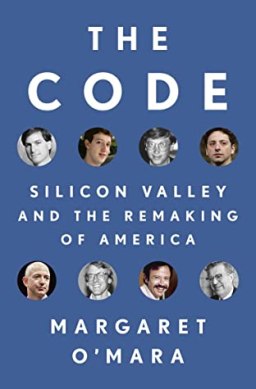 The Code also is about the interdependence of states and markets, something that long has been a focus of urban scholarship and that helped produce the emergent, and closely aligned, history of capitalism. Although we historians have been rattling on about this for a while, the memo that public and private are deeply intertwined has rarely gotten through to the rarified precincts of Silicon Valley. There, apathy for government involvement runs strong, and its former role as a defense hub is dimly remembered, if at all. Yet the state has always been part of the story, and in ways that extend beyond the military-industrial complex. Just as in any urban history, the public-private interconnection operates on several levels, and in ways that open up economic and social opportunity for some, and truncate it for others.

Like any urban and metropolitan landscape, the Silicon Valley of today is the product of policy choices, from the exclusion of women from public-university engineering programs in the 1950s and 1960s to the capital gains tax cuts of the 1970s and 1980s to the decision to allow a burgeoning internet industry to self-regulate in the 1990s. It also has been shaped by intensely local conditions and politics. Rancho-sized land ownership and permissive zoning rules allowed rapid conversion of thousands of acres of farmland into a sea of “tilt-up” office buildings, transforming Valley real estate developers into billionaires themselves. Growth-control campaigns limited development and preserved open space, but single-family zoning remained, precipitating the staggeringly high cost of residential real estate that is as much a part of today’s Valley as its sunshine. California’s midcentury investments in transportation infrastructure, schools, and higher education spurred population growth and upward economic mobility; a subsequent “age of limits” and tax revolts pushed mobility in the other direction.

When I embarked on the study of Silicon Valley in those long-ago dot-com salad days, not very many historians—and certainly not many urban historians—were there studying it with me. Twenty years on, I’m thrilled to see how much that small cadre has grown. Longtime historians of the place like Leslie Berlin and Fred Turner have produced important new work. Herbert Ruffin brought fresh and important insight into the Valley’s long African-American history. Forthcoming books by Jeannette Estruth, Jason Heppler, and Aaron Cavin explore multiple dimensions of the Valley’s political history. Recent and forthcoming work by Clayton Howard and Lindsey Passenger Wieck examine the metropolitan spaces and social and cultural dynamics of the postwar and postindustrial Bay Area. Current projects by Robin Wolfe Scheffler and Andrew Hedden examine the political economy of knowledge-driven clusters in Boston and Seattle, respectively.

Silicon Valley has always liked to think of itself as quite special and as a place apart. We historians all too often have bought into that argument, relegating the tales of Steve Jobs and Bill Gates to colorful sidebars in our textbooks, disconnecting them from the historical main events of war and protest, elections and governing, high culture and pop culture. This new wave of deeply researched, highly original scholarship shows otherwise. I can’t wait to see what’s next.

Margaret O’Mara is the Howard & Frances Keller Endowed Professor of History at the University of Washington and a contributing opinion writer at The New York Times. She writes and teaches about the history of U.S. politics, the growth of the high-tech economy, and the connections between the two. She is the author of Cities of Knowledge (Princeton, 2005), Pivotal Tuesdays (Penn Press, 2015), and The Code: Silicon Valley and the Remaking of America (Penguin Press, 2019). O’Mara is a Distinguished Lecturer of the Organization of American Historians.

Featured image (at top): Aerial view of the Seattle, Washington, waterfront and downtown skyline, with a focus on the Great Wheel, a giant Ferris wheel at Pier 57 on Elliott Bay, Carol M. Highsmith, May 15, 2018, Prints and Photographs Division, Library of Congress.