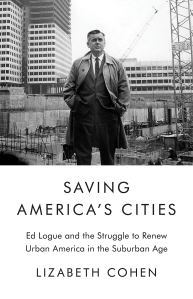 Lizabeth Cohen has given us a big, tasty book about urban renewal and the career—successes and failures—of urban planner Ed Logue. Logue had, for many, the reputation of being the “Urban Planner from Hell,” tearing the old down in the service of rebuilding city centers in the modernist style. But that reduces him to the dimensions of a cartoon. In a series of detailed case studies of Logue’s oeuvre, Cohen gives us a nuanced reading of his works. Saving America’s Cities: Ed Logue and the Struggle to Renew Urban America in the Suburban Age restores him to his rightful place as a creative and engaged planner. Cohen also does the reader an historiographical service by pointing out the several shortcomings of the prevailing narrative about this period and what a fuller understanding of “Urban Renewal” entails.

The standard narrative is that urban renewal from the 1950’s to the later 1970’s was a disaster: Cohen argues, to the contrary, that there is “a usable past of successful government involvement in urban redevelopment from which we can benefit today as we grapple with the current challenges of persistent economic and racial inequality, unaffordable housing and crumbling infrastructure.” Fully cognizant of what didn’t work, or worked poorly, she also wants the reader to see what worked well, and how lessons learned and applied resulted in improved results for the communities involved. The complex and engaged person of Ed Logue, his energy, failures, and growth in understanding of how to work with communities in planning provides the through line for her thoughtful analysis.

Why did cities need renewing? What had changed in post WWII America to make cities like New Haven, Boston, and New York need rethinking? The simplest answer is that the economies that supported them had disappeared or were rapidly disappearing, relocating to right to work states or leaving the country altogether. In addition, programs like the Interstate Highway Act of 1956 brought suburban America into existence: downtowns began to disappear. Automobiles and trucks replaced rails as the principle means of moving people and goods. What would get people to come downtown anymore if downtown had relocated, in the form of malls with plenty of parking, into suburban rings around city centers? What cities would become, through a combination of service industries, emerging technologies or new manufacturing, had not yet come into being.

Logue was a New Dealer; he believed that government had a major role to play in ameliorating the lives of American citizens. The eldest of a large Irish-Catholic family, he went to Yale on scholarship, returning to his hometown of Philadelphia to practice law only to find himself increasingly involved in and taken by the future that renewing cities seemed to promise. His work with Chester Bowles, the governor of Connecticut and then Ambassador to India, was crucial in this regard. Logue worked with Bowles in India and became enamored of the model of development that Americans were using there—comprehensive village development as key to supporting a robust democracy. Logue envisioned renewal as far more comprehensive than tear down and rebuild—though he did a good deal of the former. Community was an organic thing that needed support on several levels so that people could live successful lives, including the poor and minorities, while living in decent, well-designed affordable housing.

The arc of Logue’s career stretches from the Housing Act of 1949 to the Nixon administration’s abdication of the federal government as a player in urban renewal. Logue would partner with activist mayors and a governor—Dick Lee in New Haven, John Collins in Boston, Nelson Rockefeller in New York—forming a cadre of “the best and the brightest” to work with him to make the wheels of government and renewal mesh. His energy and drive—and temper—were of legendary proportions. Throughout this period the federal government and federal money were crucial to making renewal projects work; Logue clearly did not want to leave the cities to bankers and private developers.

The results were mixed. His work with Dick Lee in New Haven and John Collins in Boston entailed a good deal of tearing things down, not saving a lot of the earlier architectural fabric of the downtown (more so New Haven, less so in Boston), a mix of memorable and not so memorable new buildings, and a deepening awareness about the need for significant participation in the renewal process by the communities involved. Most significantly, as Logue himself observed: “The problem…was, we started to renew an old city without a secure economic base… We tried to solve it, but you don’t solve it.”

Logue’s work with Nelson Rockefeller and his instrument, the Urban Development Corporation, attempted to solve urban problems at the metropolitan level. He would have some successes—the development of Roosevelt Island among the most stunning, but prejudicial zoning and class and racial prejudice would beat back, time and again, his plans to develop new housing and social infrastructure for low- and moderate-income families. His Nine Towns project in Westchester County for low- and moderate-income families was dead on arrival, defeated by fierce local resistance. The UDC would go belly-up in the early ’70s as the economy went into a period of stagflation and the politics of housing in the Nixon years signaled a retreat of Washington as a major player in urban renewal initiatives. The Moreland Commission’s inquiry into how the UDC was financed and why it went bankrupt would point to a contradiction that was not addressed then—or now. How does an entity that has a public responsibility ever discharge that responsibility when it was funded by investors whose sole concern was to make a profit?

Logue would never again undertake urban renewal on the scale of his efforts with the UDC. His last undertaking would be in the Bronx as director of the South Bronx Development Office. The instruments of development at hand were more modest: non-profits such as the Ford Foundation became players urging collaboration at the local level. The South Bronx Development Organization worked to rebuild—street by street—the devastated South Bronx neighborhoods that had achieved iconic status as urban disaster areas—the result of white Bronx residents leaving the borough to take advantage of low-cost mortgage loans from the FHA and move to the suburbs, the massive dislocation of neighborhoods caused by Robert Moses’ Cross Bronx Expressway, and building owners walking away from their properties.

The solution was single family homes—Charlotte Gardens—suburban styles houses built for people who would not be welcomed in New York’s suburban communities. This would point the way for the on-going redevelopment of the Bronx. For Logue, it was something of a last hurrah; his remaining years would be spent teaching at MIT and at Martha’s Vineyard. He died on January 27, 2000, just shy of his 79th year.

Cohen, looking back over his career and the expansiveness of his vision, concludes by holding out the hope that this country will find “the will and wherewithal” to embrace and make good on his legacy.

Bob Carey did his undergraduate studies at Wesleyan University in Middletown, Connecticut (’61); read for degrees in theology at Union Theological Seminary in New York City (’66, 68), and did his doctoral work in American history at Columbia University in New York City (’84). He served as an Assistant Pastor at Dr. King’s Ebenezer Baptist Church in Atlanta in the ‘60’s and has been a faculty member of Empire State College since 1973, retiring in 2018. He has served as an Associate and Graduate Dean in the course of his career with the College. His areas of interests in historical studies are America’s racial and religious history, the history of food and disease and critical reading.