The Metropole Bookshelf is an opportunity for authors of forthcoming or recently published books to let the UHA community know about their new work in the field.

Coming of Age in Jim Crow DC: Navigating the Politics of Everyday Life narrates the lives of young Southwest Washington D.C. residents between 1919 and 1941. Situated in the changing urban U.S. capital in the first three decades of the twentieth century, Coming of Age looks at, in Stephanie Camp’s words, the “geographies of containment” and “rival geographies” that mostly poor and working class black young people grappled with and made, respectively, and the ways they thought of, negotiated, and contested racial segregation, discrimination, and violence in D.C. 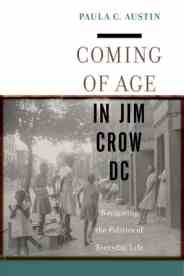 For this project, I mined E. Franklin Frazier’s papers at Howard University from his 1941 book on black adolescent personality development. Frazier interviewed over 150 teens, arguing that poor and working class D.C. young people were being damaged by racial segregation and its attendant poverty and restrictions to resources. To Frazier, their personalities and beliefs about themselves, and thus behaviors in the city and potential contributions to society, were severely at risk, if not already seriously impaired. While calling for an end to Jim Crow, he also advocated for black cultural rehabilitation. What Frazier missed was the ways that young black poor and working class people in the nation’s capital were masterfully aware of the incongruities of the city’s (growing global) symbolism of democracy and freedom and its restrictive racial geographies, racist policies, and practices. They articulated, both in words and in movement and mobility throughout the city, critiques of Jim Crowed D.C.

Interviewed in the 1930s, these young black folks were clear-voiced about their beliefs, thoughts, and theorizations. They were often eager to share their ideas about political protests in the city, stories about how they navigated the contradictions of racial violence in the national capital, and their understandings of racial capitalism and its impact on their burgeoning identities. For example, fourteen-year-old Susie Morgan, who lived in two over-crowded rooms in Clarks Court Alley, could see the dome of the Capitol building from her street. Her home would very soon be razed to house a federal building. Susie shared stories about her movements throughout the city with her friends, dodging police interactions, fights with white boys, and street harassment from black and white men alike. She and her friends reterritorialized spaces like the Union Station Columbus Fountain and the Lincoln Memorial reflecting pool as places of leisure and recreation, not only because few were available for and accessible to black children, but in order to contest racial segregation and discrimination. In her interview, Susie said about her use of the reflecting pool to swim, “‘we know we ain’t got no business in there, but that’s why we go in.”

Ultimately I hope Coming of Age will have an impact on the way we think about the “plantation to ghetto” historiographical narrative. Many scholars have drawn a direct line from slavery to twentieth century under-resourced urban areas that were predominantly black and poor. But a ghetto synthesis narrative sidesteps not only a structural analysis of urban poverty, it also obscures the dynamic and generative life and activism in black urban communities by focusing instead on deficiencies and so-called pathologies. Given the contemporary murders of so many black young people, by police violence and otherwise, I hope the book has an impact on how we think about black youth. Coming of Age is really about valuing young black urban people’s ways of knowing: to see them as possessive of an inner life, an intellectual life, and interiority more generally, in contrast to the ways in which they have been and continue to be portrayed by some researchers, youth service professionals, policy makers, law enforcement, and the media.

Paula C. Austin is an Assistant Professor of History and African American Studies at Boston University. She earned her PhD from the CUNY Graduate Center. She recently co-edited a special issue on “Teaching #BlackLivesMatter” for Radical Teacher, and has an article in Gender, Women, and Families of Color journal’s special issue on “Black Love” (Fall 2019). Her book Coming of Age in DC: Navigating the Politics of Everyday Life was published in December 2019 by New York University Press.

This post contains affiliate links. If you end up making a purchase, we may earn a commission on the sale. Thank you for supporting the hard work of writers and editors.