It is commonly thought that Accra, like many other African cities, has an architectural “identity crisis”[1] because “if you look at the city, there’s nothing that tells you where we were, where we’ve been, where we are, and where we’re going.”[2] This view, echoed in both academic and popular discourse, is held by many in the highly educated, artistic, and elite circles who are concerned with having Accra be a functional, clean, and beautiful city which reflects Ghanaian culture and values.

Academic discourse about architectural style and identity in Accra – when it is not focused on the identity crisis, bemoaning the apparent “lack” of identity, and proposing the need for a suitable one – generally identifies the following major architectural style categories:

1. Traditional Architecture and Vernacular Architecture[3] refer to architecture which belongs to an imagined pre-colonial past, as well as to simple, locally constructed buildings. These include some of the few buildings left in the (Greater) Accra area, which are constructed in earth with vegetative material as roofing, and the more ubiquitous houses constructed in blocks and roofed with aluminium roofing sheets. Representative typologies include the compound house.

2. European, “Afropean” and Colonial Architecture refer to European and European-influenced styles that were constructed in the city during decades of European colonial occupation that officially ended on 6th March, 1957. Typologies include what is known as the “Basel Mission House,” bungalows raised on stilts with “boys’ quarters”[4] some distance away, and residential and administrative buildings with colonnade verandas, and roofed with asbestos, clay, or concrete tiles.

4. Contemporary Architecture in Accra is also referred to as “modern” or “world class” architecture. Driven mainly by architects and their upper class, wealthy clients, buildings in this style share the characteristic of being able to “fit” into any major global cityscape. With slick, clean lines, bold simple forms, glazed exterior, and sometimes nods (subtle or overt) to traditional motifs and ornamentation, buildings in this style feature prominently in the high land value areas of Accra.

However, there are several buildings in Accra that do not fit, and indeed are not accepted as part of these aforementioned style categories. Apart from the countless kiosks and containers, basic dwellings, and commercial structures that abound in the city, there are numerous multi-storied commercial, residential and religious buildings that people in upper social class, elite, and highly-educated circles, as well as several architects consider gaudy, even ugly, and lacking in style.

5. Despite Architecture is coined from two meanings of the word “despite”: (1) “in spite of” or “without being affected by”; and (2) an archaic meaning that is “contempt, disdain, outrage.” The third meaning is a Ghanaian popular culture meaning, a nod to a wealthy Ghanaian businessman Osei Kwame Despite, who built his business empire despite not having a formal education. Buildings in this style are often driven by wealthy owners who do not fall neatly within the upper social and highly-educated classes. The buildings often have bold, vibrant and unusual colour combinations, purely decorative columns in the frontage, unusual and complex forms and roofs, and are driven by the use of trendy materials available in the construction markets such as alucobond and mirrored glass.

Despite Architecture, is an architecture of people outside the formal industry. It is people constructing buildings, which they consider beautiful and modern, using trendy materials and construction technologies available to them. Thus, it is just as important to acknowledge, to study, and to appreciate it and the other forms of architectural expression that exist in Accra whether they be architect-designed or not. Indeed, it is precisely because so many of the buildings in Accra can be classified as “informal,” or a product of the “architecture without architects” variety – that is, carried out by people who are not formally trained and licensed – that they should be considered as an important element of the architectural identity of Accra. For what use is it to only consider the built products of formally trained and licensed architects as architecture when they only form an arguably small part of the rich story of architectural expression in Accra?

The Despite Architecture aesthetic is not unique to Accra. It is visible in Bangalore, Nairobi, Lagos, and Monrovia and many other cities connected by shared experiences and visions of modernity. It speaks to a global (urban) material culture outside of western cities, and rapid growth in postcolonial cities where people who do not originate from elite, highly-educated classes have accessed wealth and have the need, the space, and the ability to construct their own buildings. In these cities, as in Accra, there is a relatively small formalised architectural establishment that has specific ideas of good taste and good style, but the majority of the built environment tells other stories of other good tastes and styles.

The idea of an architectural “identity crisis” in Accra stems partly from a desire to control the aesthetics of the city, and partly from the association of certain architectural aesthetics with modernity and good taste. Inherent in the idea is also a desire for the Accra cityscape to look as modern, albeit in a culturally relevant way, as “developed” cities around the world. In these cities, where the majority of building has been and still is driven by wealthy elites and a formalised architecture establishment, it has been easier for the upper classes, architects and urban designers to impose their ideas of good taste on others, as well as to control architectural identities.[7] This is not the situation in Accra, and might never be. Perhaps we have been lucky to escape the coercion, co-option, and suppression that is necessary for a definitive architectural identity to emerge.

Accra is a city with multiple architectural identities, but this is not a sign of an identity crisis. Rather, it is a physical manifestation of the multiplicity and variety of architectural styles, peoples, cultures, lifestyles, and tastes that exist. 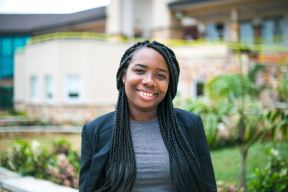 Kuukuwa Manful is a PhD candidate at SOAS, University of London, exploring citizenship and modernity in light of nation-building through a study of the architecture of secondary schools in Ghana and Senegal. Her previous research has explored the positioning of Ghanaian architects in the global modernist movement; Asante architectural identity; and social acceptance of earth building in urban areas. She is the curator of an architecture collective – adansisem – which researches, documents, and showcases stories and theories of Ghanaian architecture.

[4] Boy’s Quarters originated as accommodation for the African male servants – referred to as boys regardless of their age – of European colonial officers in the various colonies. They still persist in post-colonial housing typologies typically as accommodation for the servants of wealthy Africans, and also as external housing for use by relatives and guests, or in some cases renters in middle-class homes.

[6] The name – Despite Architecture – was coined in one of several discussions that occurred over several years with my colleagues Augustine Owusu-Ansah and Emmanuel Kusi Ofori Sarpong. Further development of ideas about the style owes much to discussions with various people in Ghana particularly Jude Nyoagbe, Edem Tamakloe, Augustus Richardson and Nana Ama Agyemang Asante. In April 2018, I exhibited a Despite Architecture Installation at an event organised by House No. 3 and The Afropole, and the spirited conversations during the exhibition, together with ensuing twitter discussions have helped to further refine my ideas.

[7] Although, it is also the case that there are likely to be architectural styles even in these so-called “advanced societies” that are not taken seriously either, and are neglected in surveys of “architectural identity”.

One thought on “Whose Style? Taste, Class, and Power in Accra’s Architecture”