Editor’s note: With the July 4th holiday behind us and summer in full swing, The Metropole brings you our second annual Digital Summer School, our effort to highlight digital humanities projects focusing on urban history. First up, University of Wisconsin-Milwaukee professor Chris Cantwell and the digital project Gathering Places, Religion and Community in Milwaukee.

Why did you establish this digital project, after all, notable parts of the nation often bang away about “academia’s godlessness” yet you’ve constructed a digital project exploring the role of religion in Milwaukee’s urban development? Who do you envision as the audience?

The project really began with my commute. Every day I walk to campus and I pass by several houses of worship — none of which are occupied by the communities that built these places. There is an old Christian Science sanctuary that’s now the home of the Chinese Christian Church of Milwaukee; the former home of Milwaukee’s oldest synagogue that is now the university’s performing arts center; and the modernist A-frame Lutheran church that’s now occupied by the Islamic Society of Milwaukee. As a historian attuned to the ways religious devotions and urban environments shape each other, there seemed to be no better illustration of this dynamic than these church buildings. And that’s when it struck me: what else might we learn about the urban environment by studying the places where people gather to commune with each other as well as, in many instances, the divine? How might our understanding of Milwaukee change? How might our understanding of religion change?

So, the project really began as a way to satisfy my own curiosity about the place I live. As for the project’s audiences, they are twofold. First and foremost this project is for my students. The project is based in a graduate seminar I teach called Local History Research Methods, which is a required course for students in our public history program. It’s in this course that students work in pairs and then partner with a church, mosque, synagogue, or temple to write its history. The arrangement gives students a chance to make something that can support their careers while also creating something that could benefit the greater Milwaukee community, which is the second audience I envision for the project. Individual congregations have already used the research my students and I have conducted to craft mission statements or figure out who used to own the buildings they worship in. I’ve also been called upon by the media to talk about local religion. If this project can help raise the religious literacy of the community, I think it’d be a success.

Since you have a mix of analysis – textual, spatial, and visual – what kind of decisions did you have to make when building the project? What archives did you decide to utilize and why? What kinds of obstacles did you encounter in this regard?

As a project that is rooted in a seminar on research methods, it employs a variety of tools in studying Milwaukee’s gathering places. In fact, it kind of serves as a laboratory for students to try out the methods that we discuss in class. When we talk about how to read sacred architecture, for instance, students then go and look at Sanborn maps or pull building permits from the city’s archives to offer an interpretation of the gathering place’s built environment. When we talk about oral history, students then interview longstanding members of the community. But sometimes the most interesting materials students find are squirrelled away in a house of worship’s basement or attic. Bringing these sources to light and documenting their existence is one of the goals I had for the project.

A downside to this approach is that there is only so much one can expect students to accomplish in the course of the semester—and there’s only so much the general public will read online as well. It’s for this reason that I only require students to write a three-thousand-word history of their gathering place based around five to six images, documents, or artifacts. But to make sure the project provides pathways for more in-depth research in the future, students also write what we call “Gathering Place Reports,” which include summaries of their church’s history, a thorough timeline, and a complete list of archival repositories and published sources on these communities.

Have you heard from or interacted with any of the institutions or religious groups featured in the project? If so, what has that dialogue been like? If not, do you have an idea as to why you haven’t?

Well, in order for a community to partner with us they’re required to identify someone who can serve as a liaison between the students and the congregation. So, the project is premised on sharing authority with these communities in documenting their past. But what’s been interesting to me is why these communities are willing to open their doors to us. Some see their participation in the project as an extension of their religious mission; a chance to spread their gospel. Other smaller communities, meanwhile, see the project as a chance to get their stories placed alongside more recognizable histories. But for all the gathering places I have had a chance to work with, there are those who have turned down a chance to partner with us. Some are just too busy and can’t be burdened with two students poking around their sanctuaries. But there are other, more vulnerable communities who might not want the attention that participating in a project like ours entails. Making a space for these communities in the project and ensuring it reflects the diversity of the city’s religious landscape is actually how I intend to grow and evolve the project into the future.

What role do digital projects like Gathering Places play in the field of history? Where do you see this project and others like it going in the future?

I think projects such as this reveal how the lines between teaching, research, and service are continuing to blur for the discipline in the twenty-first century. Though based in the classroom, the project produces scholarship and does so in partnership with the community. This kind of collaborative, digitally-inflected inquiry is a future for the field, I think, and my hope is this kind of work can be as celebrated as other modes of scholarly production.

What has this project taught you about Milwaukee, and/or perhaps more broadly, religion in urban America?

Currently the site contains the history of only seventeen places of worship, so the sample size is small. But already I’ve noticed an arch in the history of urban religion that is perhaps worth pursuing in the future. Of those historic religious communities that have managed to survive through today, most have made an important transition. They’ve gone from having once been the center of a community—where the people who sat in the pews were also those who lived in the surrounding neighborhood—to becoming a community center whose membership is constituted by some kind of unique activity or mission.

This, for me, was crystalized in the project’s partnership with St. Benedict the Moor’s Roman Catholic Church this past semester. Founded as Milwaukee’s first African American parish, the church once helped anchor the city’s Bronzeville neighborhood. But after blockbusting, white flight, and a federal highway that literally split the parish in two drove much of the community’s black residents away, the congregation declined. Only after a local meal program took up residence in the parish did the church revive. But as the church enters its second century, the congregation is trying to figure out how its past should inform its present. Once a segregated parish, St. Ben’s is now overwhelmingly white and the church has been having a series of town halls on what the community owes to Milwaukee’s black community given its history. The students and I were invited to one of these town halls, and it was moving to see history become so relevant. 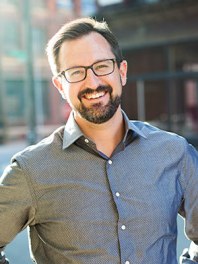 Christopher D. Cantwell is an assistant professor of public and digital history at the University of Wisconsin-Milwaukee, where he is also an affiliate faculty member of the religious studies program. His research focuses on the braided relationship between Christianity, capitalism, and collective memory in urban America, and has appeared in Religion, The Public Historian, Practical Matters, and elsewhere. A winner of the Midwestern History Association’s Alice B. Smith Prize in Public History, he has also curated a number of exhibits and digital projects on religion, journalism, and twitter bots.