In the era of Black Lives Matter and under a presidency that stokes racial division and traffics in lies, the website Black Perspectives feels all too relevant to our times. “[I]n order for Black lives to matter, we must engage the matters of Black thought,” Associate Editor J.T. Roane noted in an interview with The Metropole. Though not focusing solely on urban history, Black Perspectives nonetheless provides insight into cities around the globe and the people that inhabit them–particularly people of color. Executive Editor Keisha Blain, Associate Editor Ibram X. Kendi, and Roane have endeavored to create a “critical digital public” that will enable readers to slice through the “chicanery” of the modern news cycle and the layers of false historical discourse.

What was the impetus for creating Black Perspectives? Who do you see as your audience?

Within far too many American mainstream institutions, including its academic ones, the communities of the African Diaspora are either ignored, labeled as incorrigible social problems, or marked as helpless victims. Black communities are rarely and inconsistently acknowledged as the progenitors of generative intellectual thought, as producers of information with meaningful bearing on the matters we face as a global society.

We understand that Black intellectuals, those formally trained and those practitioners invisible from the purview of formal academic acknowledgement, are important to historicize and recall collectively, especially given our great perils, including the realities of peak oil, the violent reterritorialization of our cities, the mounting immigration and refugee crises. I approach my writing and editing for the blog from the premise that Black intellectual histories contain insights about our present, ones that can help us shift the grounds of the perilously anti-Black world we inherited through slavery, colonialism, apartheid, and racial capitalism. I see this as critical in shaping and invigorating a critical digital public, such an important task in an era when inequality in information accessibility is sharpening and in which a faction of the country has embraced outright chicanery.

Black Perspectives combines original historical research and contemporary social analysis organized in part through the basic understanding that that in order for Black lives to matter, we must engage the matters of Black thought.

I’m proud to serve in the capacity as associate editor for a platform that can produce such stunning public commentary as the July 2018 forum organized by Keisha Blain and Phillip Luke Sinitiere to honor the life and work of Sandra Bland. Taken together the pieces charted Bland’s death three years ago within histories of state violence and resistance, honored Bland’s important social justice activism, and poetically mourned the premature snuffing of her flame.

What do you hope people take away from Black Perspectives?

I hope that people come to view the matters of Black thought as myriad and complex engagements with social, economic, political, and intellectual problems as they emerged within the various historical contexts of the Diaspora. I hold these as a key roadmap to the Black Radical Tradition and as the intellectual seeds for unrealized but not unrealizable futures.

How did Black Perspectives come into being and what obstacles did you have to overcome?

Black Perspectives was organized as an accessible digital platform in 2017. It is an outgrowth of the AAIHS blog, which was founded by Christopher Cameron in 2014. Under the sage leadership of chief editor Keisha Blain and associate editor Ibram X. Kendi the platform has become a recognized site for information about the histories and ongoing work of Black communities to make sense of, survive, thrive, and lay the groundwork for a different world. Some of the obstacles we face are unique to the particular precariousness of being junior Black faculty writing publicly in ways that the academy still doesn’t fully embrace as “the work”—i.e. the print form journal articles and books that guarantee tenure. Other obstacles are the speed and nature of online platforms like Twitter where people can use anonymity to be cruel and violent. We have had to learn to take real-time feedback in stride and to brace ourselves and ignore some of the vileness that comes with the territory.

Where do you hope Black Perspectives goes in the future?

My hope is that Black Perspectives will continue to expand to include longer-format, more in-depth pieces within our repertoire as we transition to an online magazine format. My hope is also that we will continue to remain accessible—i.e. on the free side of a pay wall—as we also infuse public discussions with the critical insights derived from Black intellectual history.

How does Black Perspectives speak to urban history and what does it tell us that other sites don’t or can’t?

Much of my writing for the platform centers in the ways that urban Black communities from Philadelphia to Havana historically and in ongoing ways express alternative, often heterodox visions for cities and their futures. I hold these dissonant intellectual traditions about the urban form as the containers of epistemologies vital in the face of the radical criminalization and displacement that defines Black urban life from Detroit to Rio de Janeiro. They can help us to make sense of what is happening and also help us to draw forward out of latency processes and practices that resonate with and edify contemporary struggles to make the city livable for all. 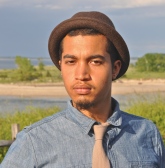 J.T. Roane is assistant professor of Women’s, Gender, and Sexuality Studies at the University of Cincinnati. He is also part of the University’s urban futures initiative. Roane is broadly concerned about matters of geography, sexuality, and religion in relation to Black communities. He is at work on a manuscript, Dark Agoras: Insurgent Black Social Life and the Politics of Place in Philadelphia, which historicizes multiple modes of insurgent spatial assemblage Black communities articulated in Philadelphia in the second half of the twentieth century. Follow him on Twitter @JTRoane.