While most of the projects highlighted by our Digital Summer School series have been place-based–such as the Encyclopedia of Milwaukee, Gotham, Chicago Elections Project, and even Tropics of Meta, though to a much lesser extent (somewhat Sunbelt, California leaning)–Nursing Clio represents a broader approach focusing on gender more than any one place or region. Launched in 2012, Nursing Clio has become one of the leading blogs in the academic universe and though not strictly urban in its orientation, cities and suburbs factor sharply in its coverage. One of its co-founders, Jacqueline Antonovich, sat down with The Metropole to explain how it came into being, where it’s going, and what insights she and her fellow co-editors have gleaned from the experience.

Why did you establish Nursing Clio and who do you see as your audience?

We started Nursing Clio back in 2012, right in the middle of an election year. If you remember, things like reproductive justice, affordable healthcare, and same-sex marriage dominated political debates and news headlines. In that one election cycle, the House passed a bill that weakened the Violence Against Women Act, the Senate blocked a measure to address sex-based wage discrimination, and several red states attempted to roll back access to abortion, repeal Obamacare, and increase efforts to discriminate against LGBTQ communitites. And of course, we had Mitt Romney’s “binders full of women,” Todd Akin’s definition of “legitimate rape,” and Foster Friess’ “aspirin between the knees” contraception advice. The media labeled it a “war on women”–and it was. In debating these issues, however, pundits, politicians, and reporters often failed to include any actual women. There was also a discernible absence of historical scholarship in these conversations that could have provided important context to these issues. Our goal, then, was to create a digital project that could amplify the voices of women by providing the space and scaffolding for both scholars and non-academic audiences to comment on these connections between past and present. We believed that a collaborative blog project was not only intellectually appealing but genuinely necessary.

What do you hope people take away from Nursing Clio?

Nursing Clio’s mission statement emphasizes the goal of connecting historical scholarship to contemporary issues related to gender, health, and medicine. Our tagline, “The Personal Is Historical,” adds an important dimension to the groundbreaking feminist claim that “the personal is political.” So I hope that the big takeaway for our readers is that “everything has a history,” as Jim Grossman says, including everything you think you know about medicine, health, and the body.

How did the Nursing Clio come to fruition? What obstacles did you have to overcome?

In 2012, I conceptualized Nursing Clio as a first-year doctoral student at the University of Michigan. The project was born from a public humanities graduate seminar taught by Matthew Countryman. The final project for the course was to create a project that would engage the public in some way. I contacted five other gender and medicine scholars across the country and asked them if they wanted to be co-founders of Nursing Clio, and from there we worked together on developing the theme, scope, and content of the blog.

Like many collaborative projects, we’ve faced our share of obstacles. About two years in, we took a hiatus to reconceptualize the back end of the project. A few of our co-founders left, we brought in new editors, and developed a new and more streamlined method for editing and publishing. The biggest lesson I’ve learned as an executive editor is that fostering a deliberate feminist space for collaboration means everyone on the editing team has an equal voice and decisions come through consensus. And although the blog is an important project, in the end, it’s just a blog. That means that sometimes life, jobs, or just self care comes before Nursing Clio and that’s totally ok. In fact, I think that’s been the key to our longevity.

Where do you hope Nursing Clio goes in the future?

Our goal for the upcoming year is to possibly create a funding mechanism for Nursing Clio. This is sort of a contentious topic among our editors. How do you ethically monetize a project like this? We would love to be able to pay our writers, and maybe ourselves one day. I’m also looking forward to establishing a paid internship program that will allow undergraduates and graduate students an opportunity to learn digital publishing skills.

So far, what moment or event related to Nursing Clio comes to mind when one ask’s about its greatest achievement or most unique insight?

I am incredibly proud of our Power of Protest series that we produced in 2017. Shortly after the election of Donald Trump, the editors held a Skype meeting to brainstorm ideas on how to effectively respond to our collective sense of despair and helplessness. We put out a call for writers to contribute to a series focused on historical protest movements across the world. We were not prepared for how many submissions we received. But the very act of protest has a long and complicated history, one that defies geographic or temporal boundaries, so I think we tapped into something very tangible and accessible for historians across subfields. We covered topics as varied as AIDS protest funerals, Bolivian housewife hunger strikes, squatter’s rights in the UK, disability sit-ins in San Francisco, and even children’s letters to US presidents.

The insight I gained from this series was twofold. First, blogs are a unique platform that can quickly respond to political and cultural moments in a way that journals and books cannot. Second, the informality of a blog allows for more flexibility in content. Many of the essays in our Power of Protest series were about health and medicine, but many were not. Collectively, however, they made a powerful statement on what protest could and could not achieve. For these reasons, I think scholarly blogs, podcasts, and even twitter threads are indispensable and important tools for historians.

More broadly, one important achievement of Nursing Clio is that we take a deliberately feminist approach to our peer-review process. Our process is not blind – our writers know exactly who is editing their piece – and this method allows for the editing process to be a friendly conversation, rather than a sterile (and sometime adversarial) process. As one of our editors, Cassia Roth, told me recently, our editing process could be a lesson for the rest of the profession. We are a public history blog. We have rigorous peer review, but we do so to help our writers flourish. 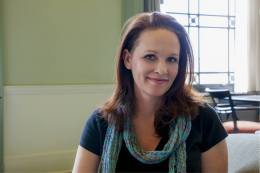 Jacqueline Antonovich is an Assistant Professor of History at Muhlenberg College in Allentown, PA. Her current research focuses on women physicians, reproductive surveillance, and medical imperialism in the turn-of-the-century urban American West. She is also the creator, co-founder, and executive editor of Nursing Clio. Jacqueline received her PhD from the University of Michigan in 2018.