Over the past thirty years, Chinese cities have boomed – more than 100 Chinese cities have populations of over a million, and the world’s newest skyscrapers are continuously reshaping their skylines. Fiction that can be characterized as “urban” is less common in China than in many other parts of the world, however. Cities and urban culture, per se, were not central to the identities of many Chinese writers until recently.

Before the twentieth-century, urban life played a minor role in Chinese literature. City building was recognized as an important function of the ruler, and so it features in some very ancient works. A poem from the famous Book of Odes (AKA Classic of Poetry, Book of Songs), revered by Confucius, describes how King Wen, the founder of the Zhou dynasty (1046-256 b.c.e.), and his son, King Wu, established Zhou rule by choosing the proper site for the capital:

He examined and divined, did the king,
About settling in the capital of Hao.
The tortoise-shell decided the site,
And king Wu completed the city.
A sovereign true was king Wu![i]

Over the centuries, thousands of poets have taken up their brush pens to commemorate the beauty of an urban garden or a bridge outside a city wall or a pavilion where literati gather to drink and enjoy each other’s verse. Princeton professor Frederick Mote pointed out that Chinese cities in the imperial era (221 b.c.e. – 1911 c.e.) had very few monumental buildings and few grand public spaces. Instead, the character of a particular city was constructed from layers upon layers of poetic representations – constituting what Mote called an “ideational tumulus.”[ii] Such poems, though, often dwell on such themes as the value of friendship, and the urban setting plays merely a supporting role.

Ordinary urban people began to make their way into popular fiction with the spread of printing technology, particularly in the sixteenth and seventeenth centuries, when the global trade in silver spurred Chinese commerce. Though often set in cities, the stories are morality tales or adventure stories that could happen anywhere along the expanding commercial networks. A translation of a collection of such stories, The Book of Swindles, is full of entertaining accounts of country bumpkins being fleeced by conmen in inns and marketplaces.[iii]

The great novels of the Ming and Qing dynasties (1368-1911) sprawl across the landscape, describing cross-continental pilgrimage (Journey to the West), righteous bandits (Outlaws of the Marsh), and empire-spanning war (Three Kingdoms), or take place largely within the confines of the opulent compounds of their wealthy protagonists (Dream of the Red Chamber and Plum in a Golden Vase). Although glimpses of cities and city life can be seen in all these novels, most aspects of urban social life are peripheral to their narratives.

Chinese writers of all sorts began to be preoccupied with urban life in the early twentieth century, as colonial enclaves and foreign dominance challenged Chinese ideals and lifeways.[iv] Two famous trilogies published in the 1930s focus on life in the great inland capital of Sichuan province, Chengdu. Their respective authors, Ba Jin and Li Jieren, both studied literature in France in the 1920s, experiencing the Paris of Gertrude Stein and of the Lost Generation writers. The role of Chengdu in their fiction could not be more different, however.

Ba Jin is the more famous of the two. He was one of China’s leading anarchist figures who exchanged heartfelt letters with Bartolomeo Vanzetti and Emma Goldman. His Chengdu trilogy included the most popular novel of 1930s China – Family – a semi-autobiographical account of a wealthy extended family torn apart by the resistance of the younger generation to the autocracy of the older.[v] The novel continues to be the most influential literary account of the May Fourth movement, a nationwide nationalistic and iconoclastic uprising of the youth of China touched off by the humiliating treatment of China during the Versailles conference.

Although set in Chengdu, Ba Jin’s Family treats the city as representative of what might be called “Old China,” a dark, violent place where hypocritical Confucian patriarchs oppress the young and collude with warlords to stifle political change. As with Dream of the Red Chamber, most of the action in the novel takes place inside the family compound, amid squabbling, brooding, and pining away. Near the end, the young protagonist runs off to Shanghai, symbol of the future, in search of a community of likeminded people who share his desire for freedom and equality.

At the time, Shanghai had become the center of Chinese commerce and industry, including the publishing industry, so many ambitious writers moved there in the twentieth century. The city features in many stories, novels, and films of the 1920s and 1930s, but not usually as a symbol of hope, as in Ba Jin’s work. Eileen Chang (Zhang Ailing) set the short story that inspired the 2007 Ang Lee film Lust, Caution, in Shanghai in years of war with Japan, and in it we see elements of a more common representation of Shanghai life: earnest revolutionary students encounter a corrupt urban scene dominated by foreign powers and their degenerate Chinese collaborators, as the sordid streets are lined with starving refugees from the impoverished countryside. That image of Shanghai and other coastal cities continued to feature in Communist depictions of the old “semi-feudal, semi-colonial” Chinese urban life after the founding of the People’s Republic of China in 1949.

Ba Jin’s novels carried on a Chinese literary tradition that privileged social interactions within a family or network over place-based narratives of city street or public life. For him, Chengdu and Shanghai served primarily as symbols of different cultures rather than as interesting spaces. Li Jieren, on the other hand, dug deep into Chengdu history and social life to create a portrait of the city and city people in his work. The first novel of his Chengdu trilogy, Ripple on Stagnant Water, tells the story of a young country girl who yearns to move to the big city.[vi] Eventually, she finds her way there to experience the excitement of its festivals and crowds. Across the trilogy, Li Jieren offers up a Chengdu social survey, with memorable characters from all walks of life, as he chronicles the eventful years leading to the collapse of Qing rule in 1911.

Ba Jin’s narrative of revolution was more congenial to the Communist message after 1949, although he had to rewrite it to downplay its anarchist influences. Ba Jin himself took on prominent roles in the new literary order in Shanghai and Beijing, founding the journal Harvest (Shouhuo 收获), where many new socialist writers published their work.

Li Jieren accepted a position as vice-mayor of Chengdu in 1950, hoping to contribute his knowledge of Chengdu’s long history to the effort to reconstruct it as a socialist city. Among his priorities: the preservation and refurbishing of the thousand-year-old “Thatched Hut of Du Fu,” a memorial to the Tang poet who had spent time in the city in the eighth century. Many of Chengdu’s old monuments survived the early years of Communist rule, but old cities were seen as a threat to socialism rather than as an asset. Particularly after the Chinese rejected the Soviet model of socialism in the late 1950s, little investment was made in urban public infrastructure. Literature and film tended to focus on the transformation of the countryside and commune life.

Li Jieren died in 1962, while Ba Jin lived to see his work banned, along with almost all pre-1949 fiction, during the Cultural Revolution of 1966-76. The work of both authors reappeared in print by the 1980s, and China entered another period of urban-centered economic growth. Much of the popular fiction of the last forty years reflects the fast-paced new culture of China’s megacities.[vii] Ba Jin’s novels still have an emotional appeal to the young, however. And Li Jieren’s place-based fiction has been embraced in Chengdu and beyond for its rich evocation of the urban culture of Sichuan. 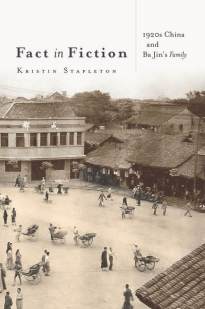 Kristin Stapleton is a member of the board of directors of the Urban History Association and of the Global Urban History Project. She teaches history at the University at Buffalo, SUNY. Her research focuses on urban administration in China and representations of cities in Chinese fiction. She is the author of Fact in Fiction: 1920’s China and Ba Jin’s Family

[vi] There are two English translations of Li Jieren’s first novel: one published by Panda Books in 1990 under the title Ripples across Stagnant Water (the translator is not named) and a newer translation by Bret Sparling and Yin Chi published under the title Ripple on Stagnant Water (Portland, ME: Merwin Asia, 2013). Kenny Kwok-kwan Ng translates the title as Ripples on Dead Water in his study of how Li Jieren represented Chengdu in fiction: The Lost Geopoetic Horizon of Li Jieren: The Crisis of Writing Chengdu in Revolutionary China (Brill, 2015).