One of my earliest memories is of my dad, a pretty even-keeled guy most of the time, punching through a toy drum of mine after what surely seemed to be the trough of his Cleveland fandom. It’s the winter of 1988, and the Cleveland Browns are facing the Denver Broncos for the second year in a row in the conference championship game. The previous year the Browns lost in overtime, after John Elway’s (in)famous 98-yard drive knotted the game up in the waning minutes of regulation (forever remembered by masochistic Cleveland fans as “The Drive”). Long story short, Browns running back Earnest Byner fumbled on the literal one-yard line with a minute left to go, losing the chance to tie the game (forever known to Cleveland fans as “The Fumble”). Browns lose again, my dad was irate, my drum destroyed. And that began my very sad sojourn as a Cleveland sports fan.

In popular culture, Cleveland sports has become so synonymous with losing that it’s one of the first things associated with the city. That narrative of loss has also tracked Cleveland’s more painful economic rise and fall from a booming steel city in the middle of the 20th century to the one of the preeminent examples of a broken down rust belt town. In 1950, Cleveland was the seventh biggest city in United States with 900,000 residents, but it had reached its peak with an economy heavily centered on manufacturing. By the late 1960s, Cleveland’s steel industry was struggling with environmental regulation, rising labor costs, and changes in trade. The city lost one-quarter of its manufacturing jobs between 1958 and 1973 and 14 percent of its overall population in the 1960s. To boot, the Cuyahoga River, which feeds into Lake Erie on the shores of Cleveland, caught on fire in 1969.

Losing was what the city became known for; after all, Cleveland was called the “mistake by lake.” And its sports weren’t any better. You can do a quick tour of these losses anytime, as the internet is littered with “Worst Moments in Cleveland Sports History” articles. ESPN’s 30 for 30 documentary “Believeland” helped popularize the connection between Cleveland’s economic demise and its sports curse.

Let’s go back to the Browns for a minute and fast-forward from 1988 to 1995. Art Modell, the Browns owner, decided to relocate the team to Baltimore for the 1996 NFL season, after he lost a bruising battle with the city to have taxpayer dollars refurbish the decrepit Cleveland stadium (forever known as “The Move”). People in Cleveland were devastated and Modell has forever been one of Cleveland’s most hated villains.

Up until this point, despite the crushing playoff losses, the Browns were largely considered a respectable franchise. They won the last title for the city back in 1964, before the NFL-AFL merger and the Super Bowl, but still. Cleveland was considered one of the most loyal, rabid fans bases. Losing the team hurt. But then, in 1999, the NFL gave Cleveland an expansion franchise. Football was back in Cleveland. And pretty much from that season on it’s been a horror show. One playoff appearance. Zero playoff wins. The worst record in the league from 1999 to today. Only two winning seasons. The Browns’ quarterback situation since 1999 has been a tire fire, starting an unconscionable 28 different QBs.

I’ve been going to the Browns home opener since 2011 (they have only won one of those games). Every year there’s the same spectrum of hope and dread among the fans, with some sure that this is the year they turn it around and the others just a little too beaten down to have any such notion. But, everyone there gets why my brother and I drive from Washington, D.C. to see the game. We know the Browns are probably going to lose. For those of us who come from out of town, or just down the street, we’d rather experience that loss with 60,000 other Browns fans. Misery loves company.

Since the mid-1980s, Cleveland’s baseball team – the Indians will be referred to as the Cleveland Professional Baseball Team (CPBT) because Chief Wahoo is a racist mascot – did things a little differently. Although mostly known as a laughing stock from the 1960s through the ‘80s, in the ‘90s the CPBT became a true powerhouse in Major League Baseball. The ‘90s CPBT were my first real “favorite team” and were beloved by the city. Despite all the star power on those teams, though, they could never make it over the hump.

The CPBT made the World Series in 1995 and 1997, losing both, with the ’97 loss coming in the 11th inning of the last game of the series. Eventually that team disintegrated, but by the mid-2010s the CPBT was once again one of the best in Major League Baseball. Last year, in the famous cursed-franchise World Series against the Chicago Cubs, the CPBT was up 3-1 before the Cubs came roaring back to win three in a row and break their 108-year drought. This year, after setting the modern-day record for most consecutive wins at 22 during the regular season, the CPBT was widely regarded as the one of the best teams in baseball. In the first round of the playoffs against the universally hated Yankees, the team went up 2-0, only for the Yankees to storm back and win three in a row and knock them out of the playoffs. Another gut-punching playoff loss.

Like the Indians, the Cavaliers, Cleveland’s NBA team, have had moderate success since the 1980s, punctuated by some pretty awful lows and the highest of highs: The Land’s only modern-day championship. Before drafting LeBron James in 2003, the Cavs were probably most famous for being one of the teams Michael Jordan regularly trounced come playoff time in the second half of the 1980s. One year after The Fumble, Jordan knocked the Cavs out of the playoffs in the first round with an iconic buzzer-beating jumper over Craig Ehlo (forever known as “The Shot”). 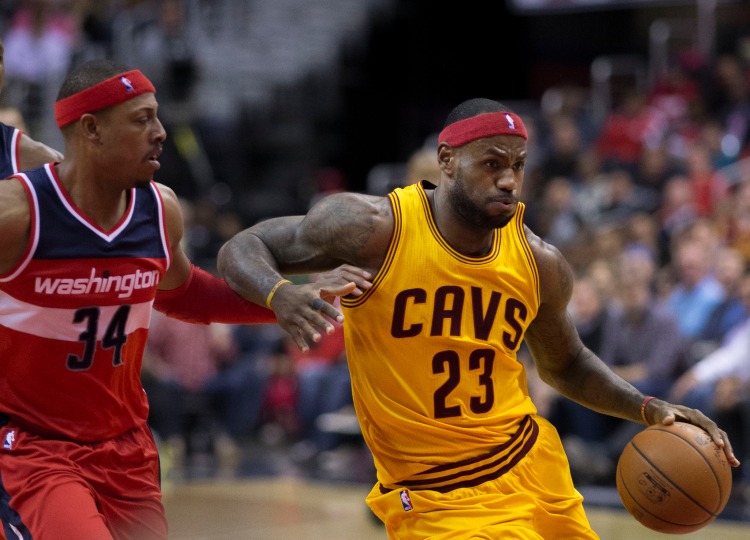 Unable to take on Jordan, that talented Cleveland team eventually fell by the wayside and the Cavs were about as mediocre as you could imagine for a decade. Then in 2003, the Cavs won the draft lottery and the chance to draft native son LeBron James, who hails from Akron, Ohio, 40 miles south of Cleveland. At 18, LeBron came into the league ready to dominate, and he was immediately embraced by the city as our best and brightest hope. By 2007, LeBron was the best player in the league (at 22!) and took the Cavs to the finals, where they lost, of course, to the San Antonio Spurs. But, that loss really didn’t hurt that much – we had LeBron, things were only going to get better.

After several seasons of not being able to advance back to the finals, things were getting dicey for the Cavs and LeBron’s mounting frustration with the organization’s inability to surround him with enough talent was beginning to make everyone in Cleveland nervous. LeBron couldn’t leave, right? In the summer of 2010, LeBron made an hour-long special on ESPN, all to tell the obsequious Jim Gray, who was “interviewing” him, that he was “taking his talents to South Beach” (forever known as “The Decision”). Cleveland was crushed.

There are many, many Cleveland fans who regret their behavior and the things they said about LeBron after The Decision and during his years with Heat. Some burned his jersey. Others tried to convince themselves he was overrated (definitely me for the first two years he was gone). In the end, though, it was obvious to everyone: we lost the best player in the world, maybe ever. How could we ever overcome that loss?

But, miraculously, LeBron returned in the summer of 2014 after going to the finals four straight years with the Miami Heat. He came home as a champion and rallied us all back when he told in the pages of Sports Illustrated: “In Northeast Ohio, nothing is given. Everything is earned. You work for what you have. I’m ready to accept the challenge. I’m coming home.”

All of that melodrama with LeBron led to the most precious, important, historic moment in Cleveland sports history: the Cavs 2016 championship. After losing to the formidable and hated Golden State Warriors in the 2015 NBA finals, the Cavs found themselves facing a 3-1 deficit to those same Warriors in the 2016 finals. Then LeBron went nuclear. The next three games were something out of a fever dream. LeBron scored 41 in game 5, 41 in game 6, and notched a triple double in the closing stand to put Cleveland over the top.

As long as I live, I will never forget LeBron’s block on Andre Iguadola with less than two minutes to go in game 7 of the 2016 NBA finals. With Iguadola about to drop in a layup to put the Warriors up two with less than two minutes to go, LeBron made the most defining play of his career: With the perfect combination of timing, superhero athleticism, and unadulterated power, LeBron locked on to the ball like precision-guided missile and smashed the layup attempt into the glass (forever known as “The Block”). The Cavs would go on to win the game, becoming the only team to ever come back from a 3-1 deficit in the NBA finals. If it wasn’t for The Decision, we wouldn’t have had The Block and it would have never been so sweet.

I watched that game from rooftop of the 9 Cleveland Hotel and got to take in the city in the immediate aftermath of the 2016 championship. Walking the streets afterward, I’d never seen so many people so happy at once, as random strangers hugged and slapped backs for blocks and blocks. Everyone let out a collective breath of relief and the curse was broken.

I’d like to say it ended there and it felt like the losses would stop. But, then the CPBT had its 2016 and 2017 post-season collapses and the Browns look as pathetic and sad as ever, losing 23 of their last 24 games. With Cleveland, the losses just seem to be so much more impactful. It’s not just run of the mill futility with regular losses piled on top of another over the years – of course, there’s plenty of that too. These are devastating losses: We lost our football team, the World Series twice in three years, the best basketball player in the world.

After The Drive, The Fumble, The Shot, The Move and The Decision and all of the tragedies foisted upon Cleveland fans by the CPBT, it’s fair to ask why Cleveland fans keep coming back? In some weird way, sports have long been a bellwether for the city; the losses are just part of a life in Cleveland. For me, the collective resolve was its own sort of victory, as I experienced so many of those losses with my family and friends. Maybe we almost never won, but at least we all went through it together.

With the NBA season just underway, and a more realistic shot at a championship than in most years for most Cleveland teams, Clevelanders stare into a deeply uncertain future. LeBron remains at his peak; after 15 seasons in the league he’s still regarded as the game’s best. But, at the end of this season, LeBron will once again have to make a decision as he enters free agency. Will Cleveland lose again?

Adam Gallagher is a writer and editor, who was born in and lived throughout Northeast Ohio. His writing on foreign policy, politics and sports has appeared in The Hill, The American Prospect, The Huffington Post, World Politics Review, The National Interest, The Progressive, The Diplomat, International Policy Digest, Tropics of Meta and for the Carnegie Endowment for International Peace, among other outlets. Follow him on Twitter @aegallagher10.

One thought on “A History of Loss: My Three Decades of Cleveland Sports”