Over 20 years ago, Timothy Gilfoyle challenged historians of prostitution to explore the flow of capital between urban brothels and the formal and informal economies of the city. More recently, Amy Dru Stanley framed the issue more broadly, asking us to consider the role of sex and gender in the “new” histories of capitalism. Katie M. Hemphill has now responded to these challenges. In Bawdy City, a fascinating economic, social, and legal history of prostitution, she shows—crucially—how “women’s sexual labor generated capital for diverse economic actors…promoting urban growth and development…” in Baltimore, a major port and manufacturing center whose economy for the better part of the nineteenth and early twentieth centuries overshadowed not just neighboring Washington, but most American cities.

In tracing the rise and fall of Baltimore’s brothels, Hemphill begins in the late eighteenth century when prostitution was a casual affair conducted in waterfront taverns and boarding houses. Here, Black and white women, often as a stopgap measure, resorted to selling sex. From this disorganized trade, brothels emerged in the 1820s as premier sex sites favored by well-to-do men. Brothels were designed to echo middle-class domestic spaces; they promised men not only sex but also an affective sociability centered on the parlor. The trend toward the establishment of brothels and professionalized sex work promoted segregation as Black women increasingly found themselves pushed into the street trade or, if remaining in the house, into the role of domestic servants.

Brothels pumped money into a broad range of urban economic activities including real estate, retailing, publishing (penny press and pornography), patent medicines, and quack medical practices offering venereal disease treatment. Real estate interests, as Hemphill shows, were the conspicuous beneficiaries of the bawdyhouse trade. Since most madams did not have the capital to purchase houses, they were obliged to rent from landlords who could inflate rental charges for those engaged in illicit activities. In the 1840s, small-scale and otherwise respectable entrepreneurs like hatters, teachers, and even sailors regularly rented their properties to madams; a decade later “wealthy men (and a few women)…grocers, dry goods importers,” emerged as landlords and real estate investors. 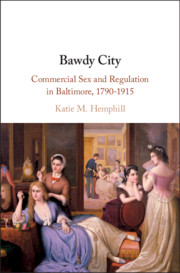 To provide an inviting sexual experience for prosperous clients, madams were obliged to lay out funds for luxurious decor, fine liquors, Black domestic staff, and sex workers clothed in genteel fashions. Merchants, like landlords, also charged far above the going rate for goods and services. Sex workers themselves poured money into the local economy by patronizing the restaurants, cafes, and theaters where they sought clients. As Hemphill explains, “those who profited most from sex work did so in ways that were exploitative to sex workers.” She argues that it was the profitability of brothels that prompted city officials to accept prostitution as an established business. Through the better part of the nineteenth century, Baltimore not only tolerated brothel prostitution, but also legitimized it by imposing regular fines that funded the city’s courts and health facilities. This policy of tacit licensing and regulation of the industry would eventually be abandoned, but only when brothels became less central to real estate and commercial interests and the city’s bottom line.

The Civil War ushered in such a tremendous expansion of the sex trade that the prospects for brothel prostitution appeared boundless. The problem, however, was that even though prosperous men may have profited from brothels, perhaps also enjoying the company of the residents, they did not want the bawdy houses encroaching on their own respectable neighborhoods. Hemphill points out that although the city allowed brothels to thrive, a growing middle-class opposition argued that the houses not only posed a threat to public morality, but also to property values. In Hamilton v. Whitridge (1857) the courts agreed, allowing the use of an injunction to pressure brothel madams to move, not on the grounds that they engaged in immoral or illicit operations, but because, like slaughter houses and tanneries, brothels diminished the value of the neighborhood—paradigm shift in the legal landscape.

But where would brothels be allowed to relocate? Throughout the 1870s and 1880s, police began pushing them into poorer, marginal neighborhoods that would, in time, became the home of Black residents. The poor but respectable residents of those neighborhoods might complain, but the police and city authorities were not inclined to listen. The presence of brothels in those neighborhoods eventually re-opened brothel prostitution to Black women.

By the 1890s shifts in courting culture and urban recreation contributed to the decline of the brothel as young women began free-lancing, drifting away from parlor houses to concert saloons, beer gardens, dance halls, and amusement parks. In these spaces the line between courting and sex work blurred. To survive, brothels offered niche sexual services. By 1915 anti-vice activists gained enough political traction to shut the brothels down.  Commercial sex was now pushed deeper into the shadows and into Black neighborhoods. Hemphill notes that “reformers succeeded only in making life worse for sex workers, whose voices they seldom listened to as they sought to implement new, more suppressive policies.”

Though Bawdy City is very much a political and economic history, Hemphill’s meticulous archival research into court dockets, tax records, and almshouse admission books allows her to highlight the lives of prostitutes and madams. In the end, she convincingly shows how the labors of these otherwise forgotten women contributed to the development of Baltimore; at the same time we see vice pushed into African American communities.

The closing of the brothels in Baltimore subjected sex workers to the vagaries of the police and the brutality of pimps. By 1922 the British feminist Alison Neilans could write, “perhaps no class of people have been abused, persecuted, hated, or alternatively, sentimentalized over as prostitutes have been, but one thing they have never had yet, and that is simple justice.”

Not much has changed. Today, during the pandemic, sex workers are excluded from the aid offered in the Coronavirus Aid, Relief, and Economic Security (CARES) Act, which bars funds to businesses and people who earn money “through the sale of products or services, or the presentation of any depictions or displays, of a prurient sexual nature.” Many sex workers are turning to mutual aid networks while others continue to sell sex at considerable risk to themselves and their customers. Particularly vulnerable are those with criminal records, people of color, trans women and the undocumented. In the end, sex workers suffer collateral damage within a moralizing neoliberal order that fetishsizes the gig economy, yet forces sex workers into the shadows where they fail to gain simple justice. 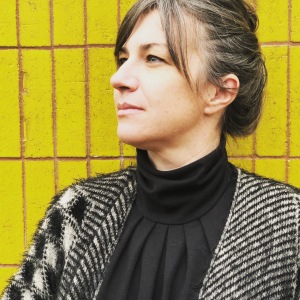 Jessica R. Pliley is an Associate Professor of Women’s and Gender History at Texas State University and holds a PhD from the Ohio State University. She is the author ofPolicing Sexuality: The Mann Act and the Making of the FBI (Harvard, 2014) and the co-editor of Fighting Modern Slavery and Human Trafficking: History and Contemporary Policy (Cambridge, 2021) and Global Anti-Vice Activism (Cambridge, 2016). Her work has appeared in the Journal of Women’s History, theJournal of the Gilded Age and Progressive Era, and the Journal of the History of Sexuality and several anthologies. Her current research explores the long history of anti-trafficking movement from the late nineteenth century to the early twenty-first century.