For now, Cityscape is The Metropole’s listing of recent, forthcoming, or overlooked writing. When movie theaters and museums re-open, we will again link to films and exhibits of interest to urban historians.

To Live and Defy in LA: How Gangsta Rap Changed America

An inquiry into Gangsta Rap, that ferocious musical and poetic outburst arising from rage and frustration within the black community. A Los Angeles story framed by Watts (1964) and Rodney King (1992).

Madness in the City of Magnificent Intentions: A History of Race and Mental Illness in the Nation’s Capital

Among the largest and most prestigious mental institutions in the nation, St. Elizabeth’s was established by the Federal government in the 1855 to treat soldiers and residents of Washington, D.C. Patients included African Americans and in this path breaking volume, Summers documents how their treatment differed from that of whites. 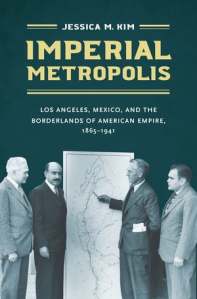 Los Angeles is seen here as an oligarchic city-state bent on exploiting the land, labor, and resources of its neighbor, 130 miles to the South. What stood in the way? The Mexican revolution!

News and Features on The Net

Given overwhelming Covid 19 concerns, Cityscape maintains its focus on the history of cities besieged by plague. Following that approach, we also highlight journal articles in which police violence is considered as a public health issue.

By Wikipedia, the free encyclopedia

Throughout the eighteenth and better part of the nineteenth century, yellow fever devastated American cities, though rarely did it strike so hard as at Philadelphia where between August and early November, 1793, it killed 5,000 out of a population of 50,000. New York, Baltimore, and other cities attempted to deny entry to Philadelphia refugees. Dr. Benjamin Rush, signer of the Declaration of Independence, would make his reputation in Philadelphia by bleeding and administering mercury, a regimen that almost certainly hastened the demise of his patients. He nonetheless boasted of successful outcomes. Free African Americans—Pennsylvania had abolished slavery in 1780—having been advised (as it turned out erroneously), that they carried immunity to yellow fever, stepped forward in disproportionately great numbers to nurse the sick, only to be later denounced by editor/publisher Mathew Carey for their venality. Absalom Jones, founder of Free African Society of Philadelphia, penned a strong rebuttal.

Mathew Carey, A short account of the malignant fever, lately prevalent in Philadelphia: with a statement of the proceedings that took place on the subject in different parts of the United States (1793).

Absalom Jones, A narrative of the proceedings of the black people, during the late awful calamity in Philadelphia, in the year 1793: and a refutation of some censures, thrown upon them in some late publications (1794).

[Note: We acknowledge linking to the oft-maligned Wiki. But English language Wiki, now boasting 6.1 million generally useful and often first-rate articles, should find a place next to the library at Alexandria, Diderot, and the Britannica 11th edition as one of the great reference works in the history of civilization. Wiki is free, carries no advertisements, and can be corrected.]

Breaking The Back of Polio

In 1916, a virulent strain of polio, an ancient but little understood disease, broke out in Pigtown, a working class section of Flatbush in Brooklyn. By year’s end it had killed 2,400 New York City children, eighty percent below the age of five. Across the nation that year, polio paralyzed 27,000 with the young disproportionately afflicted. Over the next 40 years frantic parents often sought to get their kids out of cities, which especially in the summer appeared as danger zones for “infantile paralysis.” In this article Professor Oshinksy writes of urban fear and medical triumph with particular attention to the work of Dr. Dorothy Horstmann whose pioneering research paved the way for the Salk and then Sabin vaccines. See also David M. Oshinsky, Polio: An American Story (2006).

Trends in Mortality Due to Legal Intervention in the United States, 1979 Through 1997

Between 1979 and 1988, there was a substantial decline in the number of persons killed by police and other law enforcement officers in the course of “legal interventions.” In the nine years that followed, there was no further progress. However, the 1979-88 decline is notable, considering incarceration rates at the time were soaring.

This analysis of deaths resulting from “legal intervention/law enforcement” shows 96 percent of the victims were men, largely in their prime, ages 20 to 44. American Indians and Alaska Natives, African Americans, and Hispanics were, in that order, disproportionately the victims. Mortality rates varied greatly by state and county. Non-Hispanic Black males were most at risk in Nevada and least at risk in North Carolina. At the county level, Black males were most at risk in Riverside County in California and least at risk in Kings County (aka Brooklyn).

Deaths Due to Use of Lethal Force by Law Enforcement: Findings From the National Violent Death Reporting System, 17 U.S. States, 2009–2012

While whites were more likely than any other group to suffer violent death at the hands of the police, African Americans, relative to their population, were 2.8 times more likely than whites to be killed. More than 80 percent of those killed by the police were armed. About a fifth of all victims were considered to have mental health problems and another fifth might have been suicidal. A confrontation with a “domestic partner” figured in fourteen percent of the cases. However, since more than half of these cases were “unclassified,” the issues related to cause of death in those cases were not recorded.

After Ferguson in 2015, The Washington Post, skeptical of FBI figures, began its own count of the numbers killed by police and over the next four years reported that the number, about twice as many as reported by the FBI, amounted to about a thousand a year. There is little evidence that better police training has an effect on reducing the numbers killed. As most victims are shot rather than strangled or beaten to death, most police killings—about three per day—attract little attention especially in a country where 100 people a day are killed by guns.

The Autobiography of Lincoln Steffens

In The Shame of The Cities (1904), which established his fame as a muckraker, Lincoln Steffens exposed political corruption in St. Louis, Minneapolis, Philadelphia, Pittsburgh, Chicago, and New York. The Autobiography takes the story much further in advancing a broad based inquiry into how democracy is corrupted–first with saloon keepers, madams, and gamblers paying off the cops and then with corporations paying off public officials at every level of government. Increasingly critical of self-righteous reformers, including himself, Steffens turned away from democracy to embrace the raw power of those who apparently could get things done: Henry Ford, Lenin, and Mussolini. He did not live to see how those stories ended. Monumental, wonderfully readable.

What are you reading, viewing or looking forward to? Do you want to write a review? Let us hear from you.

Featured image (at top): An east prospect of the city of Philadelphia taken by George Heap from the Jersey shore, under the direction of Nicholas Scull surveyor general of the Province of Pennsylvania, engraved by T. Jefferys (1768), Prints and Photographs Division, Library of Congress (cropped).