A Huffington Post reporter contacted me in early August, 2016. “What’s going on in Philadelphia?” he wanted to know. “How can you as a historian help me make sense of what I’m hearing?” Donald Trump had just received the Republican Party’s nomination a couple weeks earlier and the Huffington Post was canvassing the city to take the pulse of Philadelphia voters. What reporters found surprised them. Nearly every African American voter the Post spoke to said they would vote for Hilary Clinton. “For the most part,” as one respondent put it, “it feels like she is for the people.” Yet, in a city known as a Democratic stronghold, many voters signaled a willingness to at least flirt with Donald Trump. The city clearly had a racial divide in its political views.

The Post’s article, which focused on South Philadelphians, featured sentiments from Trump’s supporters that will surprise few readers after two years of his administration. “He seems to have a head on his shoulders. He does know what he is talking about,” said one woman. “It’s the change that we need for a long time instead of politics as usual,” said a technician. “He seems down to earth – an average type of guy.” Others pointed to, of course, immigration: “I have no problem with people that come here and go through the proper channels,” a man said. “I have a massive problem with illegal immigration and people who are here gaining benefits … and not following the rules and doing better than people who are citizens and work here and are on the street.”

As we all know, Donald Trump carried Pennsylvania and its crucial twenty electoral votes, winning the state by 44,000 ballots. In Philadelphia, Hilary Clinton claimed 82 percent of the vote to Trump’s 15 percent. Clinton had a crushing victory in Philadelphia—by far her best countywide tally in the state—but her percentage slipped three points from Barack Obama’s count, and Trump’s 109,000 votes in the city were enough to assure his statewide triumph. Postmortems of Philadelphia’s votes showed that black and Latino wards voted overwhelmingly for Clinton while those with larger white populations gave the Democratic candidate significantly less support, or in some cases even went for Trump. Those wards were overwhelmingly concentrated in the city’s northeast, not South Philadelphia where the Huffington Post’s reporters had roamed.

I thought about these returns, the national importance as well as the vagaries of Philadelphia politics, often in the months after the election. I also thought about how reporters identified surprising politics afoot, and turned to a historian for explanation (even if most of my great quotes—as always, alas!—were left on the cutting room floor). The election of 2016 planted the seeds for an edited collection that I have coming out from Temple University Press. When the press’s editor contacted me in January of 2018 to meet at the AHA, I knew a real opportunity existed to pull together some of the exciting new scholarship regarding Philadelphia’s African American political history. Such a collection could contribute not only to scholarly understanding of the city and the historical experience of its black population; it promised a historically grounded way of thinking about how Philadelphia and the nation had arrived at this current political moment.

In an age of the Black Lives Matter movement, the campaign for a living wage (Fight for $15), the activism around the deaths of Trayvon Martin, Michael Brown, and other African Americans, the reaction to the assault on the social safety net by the Trump administration, and many other issues, it is impossible to ignore the importance of African American political activism. African American Politics in the City of Brotherly Love aims to give readers a deeper historical sense of how black political engagement has developed over the last century while at the same time emphasizing how Philadelphia has served as a critical site for African American politics. The book covers the long twentieth century, spanning the late 1800’s through the first two decades of the twenty-first century. Authors explore Philadelphia’s history chronologically, helping readers understand the impact on politics of the growth of black Philadelphia’s population in the 1910s; the cultural ferment of the 1920s; the dire economic circumstances of the Great Depression; World War II’s economic respite; the growth of the Democratic Party in the 1950s; the hope and disillusionment of the 1960s; the rise of Frank Rizzo and reactionary politics; economic decline and new alliances in the late twentieth century; and a new era of more radical activism in the Obama years and beyond.

African American Politics in the City of Brotherly Love takes an expansive view of politics. Elections and political office of course matter. The importance of electing Wilson Goode, John Street, Michael Nutter, and Dwight Evans to the mayor’s office and Congress cannot be underestimated. But this collection extends beyond these stories and digs deeply into the city’s social movements that drew on class, gender, and other markers of identity to mobilize black Philadelphians throughout the twentieth century. These mobilizations led to advocacy for a wide array of changes in the city and beyond: job rights, access to housing, equal educational opportunities, and fair treatment by the police among many other goals. In the end, the book will offer a holistic treatment of black Philadelphia’s history that helps readers understand how the interplay between activism and the broader political context shaped developments in the African American community and the larger city.

What especially energizes me about this collection is the stable of vibrant, young scholars who are making exciting contributions to the field, augmented by a few seasoned hands who bring a more experienced perspective.

This is an exciting lineup of scholars offering fresh insights on black politics in Philadelphia. Their work promises to change scholars’ understanding of African American political development. Just as importantly, with an anticipated publication date of spring, 2020, their research should inform voters as they head to the polls in November that year. It is my honor to bring these fine scholars together so their work can help shape discussions about race and politics in urban America.

When in the mid-1990s I first started to research and write about twentieth-century Philadelphia, especially its African American community, there was only a limited body of scholarship on the subject. As Philadelphia Divided came out, Matthew Countryman’s Up South, Guian McKee’s The Problem of Jobs, and Lisa Levenstein’s A Movement Without Marches joined my work. We in some ways jumpstarted the historical study of contemporary Philadelphia. A wave of young scholars has since come along to ask new questions, find new sources, and advance the field. I am excited to know that future Huffington Post reporters will not only have this book to turn to, but many more scholars to consult. 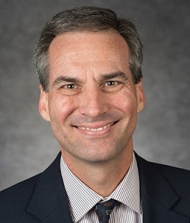 James Wolfinger holds a joint appointment in history and education. He serves as associate dean for curriculum and programs in the College of Education, and is the director of the DePaul University and Facing History and Ourselves Collaboration. In addition to his two books, his articles and reviews have appeared in the Journal of American History, American Historical Review, Journal of Urban History, Labor, and Pennsylvania History.