Editor’s note: Remember that SACRPH 2019, the organization’s 18th conference, is in Northern Virginia (NOVA or NoVa)  this October/November from October 31 – November 3, the deadline for the CFP, which you can view here, is March 15. With this in mind, we begin our focus on NoVa as our Metro of the Month.  Submit your panels everyone!

Before June 7, 1987, when the Metropolitan Washington Airports Authority (MWAA) took control of Ronald Reagan Washington Airport and Washington Dulles International Airport, the Federal Aviation Administration (FAA) operated these facilities. They were the only two major commercial airports built and operated by the federal government. Since the FAA also regulated the airlines, it took an indirect approach when it came to managing the usage of these airports by the airlines. The result was that for decades Dulles remained underutilized, while National remained overcrowded. While MWAA has increased the usage of Dulles, it has been unable to relieve air traffic congestion at National. The reason for this is simple; travelers will opt for the more convenient airport even if that airport is crowded.

In 1947, a Civil Aeronautics Administration (CAA) analysis group reported that Washington National Airport would exceed its capacity to handle both aircraft and passengers by 1955. The group recommended building a new airport to relieve this overcrowding since DCA’s location made expansion of the existing airfield impractical. Acting on this recommendation, Administrator D. W. Rentzel requested Congressional authorization to build a second commercial airport for the National Capital Region. Congress agreed to this request, passing the Airport Act of 1950. Almost from the start, the CAA understood that if the new airport were too far from the nation’s capital travelers would choose the convenience of a congested National over an uncrowded but remote airport. During the Congressional hearing over funding for the new airport, the CAA specifically rejected the notion that Baltimore’s newly constructed airport could function as the region’s second airport because it was too far away.[1]

The CAA initially chose Burke, Virginia as the location for the new airport, but community opposition forced it to look elsewhere. The CAA chose Burke because it had enough undeveloped land to build what in 1950 would be a modern, efficient airport; it was also only 30 minutes further from Capitol Hill than National. As work on the new airport stalled the 1947 forecasts for National Airport proved correct with both aircraft and passenger usage exceed the facility’s limits resulting in a congested terminal, insufficient passenger parking, a crowded airfield, and more aircraft arriving than the facility could safely accommodate. Eventually, Congress demanded the CAA do something about all this congestion but do it someplace other than Burke, the CAA selected a site near Chantilly, Virginia for the region’s second airport. In 1958 construction began on Washington Dulles International Airport. The Chantilly location had been among the handful of sites under consideration since 1948 but was deemed too far a commute. Between Dulles’ opening in November 1962 and its transfer to MWAA, the airport was under utilized while passenger and aircraft traffic at National continued to grow. Only since the mid-1990s has Dulles’ numbers equaled those of the older, much smaller airport.

The Air Transport Association first identified a public preference for a convenient airport over an uncongested one in a study conducted in 1953. This study showed that in New York and Los Angeles where there was a choice of airports, travelers preferred the one with the least amount of driving even if that airport was more congested or offered fewer flight options to their destination. Passengers demonstrated this same preference in the Washington Metropolitan Region preferring crowded over underutilized National over distant Dulles.[2]

National’s convenience stems from the fact it is one of the few airports in this country located adjacent to a city center. Travel time from Capitol Hill to this airport is about 30 minutes. It can take just over an hour for members of Congress to get to Dulles. Being closer makes National the preferred airport. In 2017, about the same number of passengers used National (11,506,310) as used Dulles (11,024,306). This parity is recent since usage at Dulles did not come close to National’s numbers until the early 1990s. The significant event that brought this about was the completion of the Dulles International Airport Access Highway (DIAAH) section between the Capital Beltway and Interstate Highway 66.[3]

Dulles’ designers understood from the start that the success of the airport depended on swift and easy access. During the original construction, sufficient right of way was acquired to allow the building of not just a four-lane limited access road to the airport but a double track rapid transit rail line and a four-lane local access highway as well. The access highway would not run all the way to the District of Columbia but connect with Interstate Highway 66 (I-66) near Falls Church, Virginia (with that road completing the connection into Washington). When Dulles open in November 1962, I-66 only extended as far east as Gainsville, Virginia. Unfortunately, before Virginia began construction on I-66 inside the Beltway local opposition to the road delayed the work until 1980. During this delay passenger growth at Dulles was sluggish while National Airport reached almost double its designed capacity.[4]

Once the completed DIAAH/I-66 access route opened in November 1983, Dulles saw an increase in its rate of growth. Easier access from the District was not the only factor contributing to this trend. During the ensuing twenty years, the Northern Virginia suburbs had grown out toward the airport along the access road corridor. As a result of this, a significant number of potential travelers now lived or worked closer to Dulles than National.

The planned rapid transit line to Dulles never began because the construction of any mass transit system in the Washington Metropolitan Region fell under the purview of the National Capital Transportation Agency (NCTA). This federal agency created by the National Capital Transportation Act of 1960 was responsible for all mass transportation planning in the region. Over the next several years, the FAA assisted the NCTA by providing passenger data at both Dulles and National Airports to assist it in the planning of what would become the Washington Metro. Several plans developed by the NCTA showed a rail line out to Dulles International, but the construction of this connection was always considered a future project, and not included any current budget. Finally, in 2004 the airport took matters into its own hands when MWAA announced it would fund construction of a Washington Metro line to the airport with the projected completion sometime in 2020.[5]

The FAA adopted several policies during the first decade of Dulles’s operation to encourage the airlines to move the majority of their operations from National to Dulles without actually ordering them to make such moves. This indirect approach was necessary because of the regulatory authority the agency exercised over the airlines. Baltimore and the State of Maryland were continually accusing the FAA of exerting undue influence over the airlines to use either National or Dulles over Baltimore’s Friendship Airport, now known as Baltimore/Washington International Thurgood Marshall Airport. Friendship was constantly struggling to attract enough flights to stay out of the red financially. Beginning with Congressional hearings in 1950, Baltimore accused first the CAA and then its successor the FAA of taking air traffic that rightfully belonged to them.

The FAA’s first indirect policy was a ban on turbojet aircraft at National. Initially, this ban was easy to enforce since the first jetliners were too big to operate from National’s short runways. However, the next generation of smaller jets like the Boeing 737 and the Douglas DC-9 could operate from those shorter runways. With the nation’s midsized airports opened to jet aircraft by these models, there was no longer a reason for the airlines to retain their older and more expensive prop airliners. By 1965 the removal of these older aircraft from service forced the FAA to choose between closing National or allowing jets to use the facility. The popularity of convenient National over distant Dulles with members of Congress made closing National politically impossible, so jets were allowed to use the field.[6]

Just before its opening, the FAA designated Dulles the region’s long-range airport and relegated National to short-haul flights. When the FAA lifted the jet ban at National, it sought to reinforce this designation by imposing a 600-mile perimeter on nonstop flights. However, at the urging of Congress, this perimeter was extended to 1,000 miles, where it remained until 1996. In that year Congress passed legislation that extended the perimeter to 1,250 miles and allowed for twelve round trip flights daily, one to each of twelve cities beyond the perimeter: Austin, Denver, Las Vegas, Los Angeles, Phoenix, Portland, Ore., Salt Lake City, San Diego, San Francisco, and Seattle.[7]

One further attempt by the FAA to influence airlines to move operations from National to Dulles was a limit on the number of take-offs or landings that could occur each hour at National. The agency imposed the first of these slot limitations in 1969. The airport was limited to 37 slots per hour. This policy worked, with passenger volume remaining static until the year 2000. During this time passenger volume at Dulles grew, eventually surpassing that at National. After 2000 the advances in air traffic control technology allowed the FAA to increase the number of slots per hour without adversely impacting congestion in the air around the airport, which was the official reason for the limitation. National is currently limited to 62 slots per hour. With more flights allowed, many airlines that had moved operations to Dulles during the boom following airline deregulation in 1980 have since moved back to National.

Despite its small size, National was the 24th busiest airport in the country in 2017 based on passenger boardings, while Dulles was 25th. With a land area of 861 acres, National falls well below the 5,698 acre average for a commercial airport in the United States. Dulles is 15 times larger with an area of 13,000 acres. The same restrictions on growth that existed in 1947 when the CAA determined a second airport was needed exist today, so the airport can not expand—yet passenger throughput continues to grow. This trend will only continue in the coming years. One reason is that National’s biggest fan, Congress, is not going anywhere. Another is that in 2018 Amazon announced the location of its new headquarters a 10-minute drive away from National in Crystal City, Virginia. This development represents tens of thousands of new customers for National Airport especially given the location of Amazon’s current headquarters. That facility is in Seattle, one of the twelve cities outside the 1,250-mile perimeter with direct flights.

For any number of reasons, Dulles should be the busier of the National Capital Region’s two airports. The one unknown in the future is the opening of the Washington Metro station at Dulles in 2020. Will that opening finally gives Dulles the advantage in the convenience struggle or will Amazon’s HQ2 offset any passenger gains from the rail line? 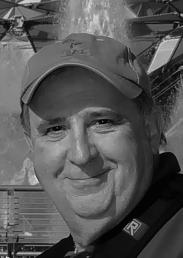 Ray W. Clark graduated from Lincoln High School, Portland, Oregon, in 1966. He received his Bachelor of Arts from Reed College in 1970. He was a commissioned officer in the United States Navy from 1970 to 1991 then worked as a project manager for PRC, Litton Industries, Northrop Grumman, and TASC from 1992 to 2013. He is currently retired. He received a Master of Arts Degree in National Security Studies from Georgetown University in 1986, a Master of Arts in History from George Mason University in 2006, and a Ph. D. in history from George Mason in 2017. He is currently finishing a history of Washington Dulles International Airport.

My Tweets
Follow The Metropole on WordPress.com
Join 478 other subscribers