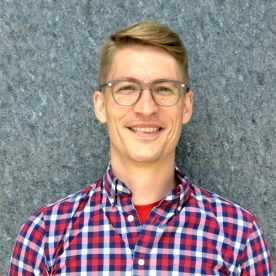 Ph.D. Candidate in the History and Theory of Architecture

University of Pennsylvania School of Design

Describe your current research. What about it drew your interest?
I am currently wrapping up my dissertation. It’s a study of competing ideas about the future of metropolitan America during the 1930s. I focus primarily on two architectural projects, Frank Lloyd Wright’s Broadacre City and Rockefeller Center, designed by Raymond Hood and a handful of other architects. At face value, these two works seem entirely incompatible. Wright’s techno-pastoral celebration of decentralization, which only exists in a handful of books and a giant model, doesn’t appear to have much in common with a dense assemblage of office towers and theaters built in midtown Manhattan. My contention is that they were, in fact, two sides of the same coin. Not only because Wright first exhibited Broadacre City at Rockefeller Center in 1935. The two projects both used the same points of reference—the proliferation of skyscrapers, automobile-induced suburbanization, technologies like radio and television, an acute crisis of capitalism—to make divergent arguments about how the social, cultural, and economic landscapes of metropolitan America might be reconstituted. What drew me to these projects was a notion that reframing familiar works could produce something new.

Describe what you are currently teaching. How does your teaching relate to your scholarship?
I spent the past year teaching history and design in the School of Architecture and Landscape Architecture at the University of British Columbia. My dissertation work is part of a larger research interest in the histories of skyscrapers and suburbs, which (very conveniently) dominate the landscapes of Metro Vancouver. In my history seminars, I used the peculiarities of Vancouver’s mixture of density and dispersion to frame discussions of industrialization and financialization, infrastructure and environment, the pervasiveness of inequity and the persistence of utopia. By using Vancouver as a laboratory, my students were able to better grasp less visible, sometimes nebulous qualities of architectural and urban history.

What recent or forthcoming publications are you excited about, either of your own or from other scholars?
A number of recent books have helped me to define my own position at the intersection of architectural and urban history. Among them are Francesca Ammon’s Bulldozer: Demolition and Clearance of the Postwar Landscape, Brian Goldstein’s The Roots of Urban Renaissance: Gentrification and the Struggle over Harlem, Reinhold Martin’s The Urban Apparatus: Mediapolitics and the City, and Sara Steven’s Developing Expertise: Architecture and Real Estate in Metropolitan America. Since last year would have been Frank Lloyd Wright’s 150th birthday, there are quite a few new studies of his work. Of the most interest to UHA members would probably be Frank Lloyd Wright: Unpacking the Archive, an edited volume that accompanied a major retrospective at the Museum of Modern Art, and Neil Levine’s The Urbanism of Frank Lloyd Wright. (Although, I argued in a review of Levine’s work that there are issues with his framing of Wright’s relationship to American urban history.) I’m looking forward to finishing the dissertation so that I have time to grapple with Edward Eigen’s On Accident: Episodes in Architecture and Landscape. Finally, and it’s not a work of historical scholarship, but I am currently enjoying Kim Stanley Robinson’s New York 2140, a science-fiction novel about the catastrophic convergence of climate change and finance capitalism set in a semi-drowned, 22nd century Manhattan.

What advice do you have for graduate students preparing a dissertation project related to urban history or urban studies?
Since I’m currently trying to wrap up a dissertation, I’m not sure I’m in the best position to answer this right now. But, I think my own work has benefited from a willingness to let the project evolve as I made new archival finds (or didn’t find what I’d hoped for), which sometimes required rethinking how I was framing things. I’m not sure if that’s a terribly original observation or how it applies directly to urban history or urban studies, but a mix of focus and flexibility has been useful throughout this process.

Most people can list off the name of a few famous skyscrapers. What’s a skyscraper that no one knows about, but should?
Here’s one I became fascinated with as I was researching the backstory of Rockefeller Center. The Standard Oil Building sits on Broadway, in New York, a couple blocks south of Wall Street. In terms of design, it’s fairly unremarkable. It was designed in the early 1920s by Carrère & Hastings, with Shreve, Lamb & Blake, and is composed of two roughly parallel, sixteen-story bars intersected by a bulky pyramidal tower, an arrangement all but dictated by the 1916 zoning law. Inside of this behemoth, however, are two earlier Standard Oil Buildings. The original is a ten-story, load-bearing masonry structure built in 1886 by Ebenezer L. Roberts. In the mid-1890s, Kimball & Thompson engineered a mostly self-supporting, steel-frame annex that rises alongside the original before adding seven floors to the overall height. The final, 1920s version assimilates the earlier buildings behind a uniform façade, but the floor plans retain obvious traces of each incarnation. So, hiding in plain sight, the Standard Oil Building is a singular accretion of almost fifty years of early skyscraper history.

One thought on “Member of the Week: Joseph Watson”