In December, the University of South Carolina dedicated two new historic plaques on the Horseshoe, the school’s original campus. Each marker described the school’s ownership of enslaved people and use of enslaved labor from its founding until the Civil War. One included the names of sixteen individuals owned by the college or hired out to work there. For the first time, the names of enslaved people appeared on the landscape alongside the names of slave owners and ideological proponents of slavery that currently adorn buildings across campus. Now, next to the last names of prominent South Carolinians—Rutledge, Harper, Legare, DeSaussure—a visitor can find the first names of Abraham, Amanda, Anna, Anthony, Charles, Henry, Jack, Jim, Joe, Lucy, Mal., Peter, Sancho, Simon, Toby, and Tom—the only enslaved people whose names appear in college records. 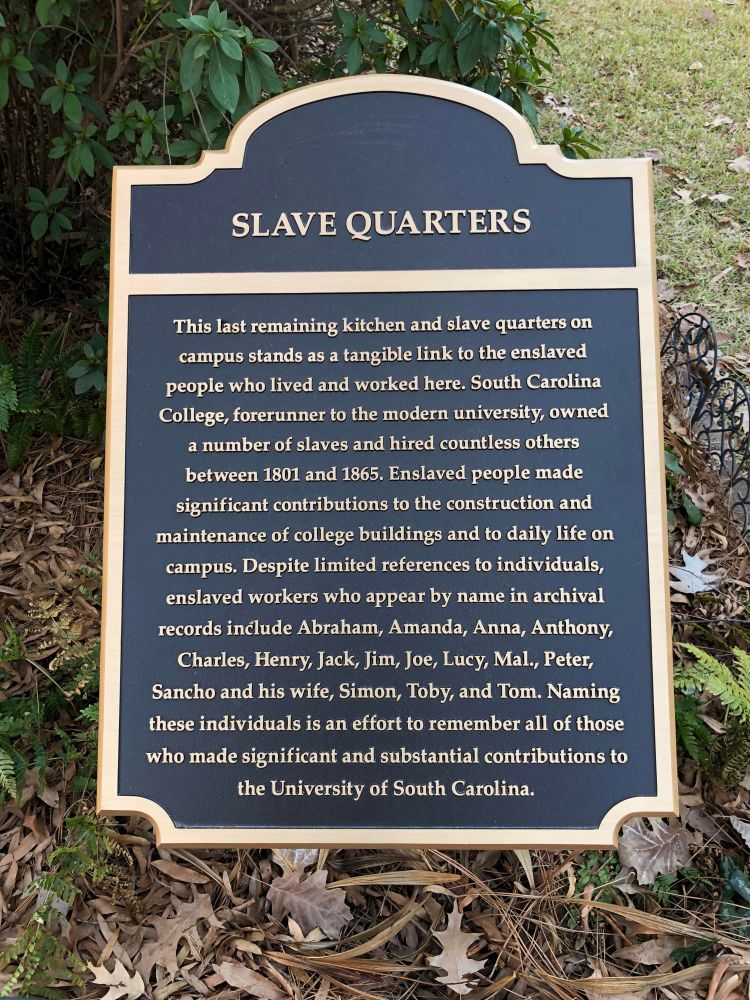 The lives of these white men can easily be accessed through histories of South Carolina, biographies, and even Wikipedia articles. Very little has been written about the enslaved people named on the plaques. This comes, in part, from the fact that enslaved people did not have the same opportunities as prominent white men to leave behind a written record in their own voice. Still, we can know something about their lives and how they lived them. Reading between the lines of institutional sources and adding context through a broader understanding of the lives of enslaved people in South Carolina, we can begin to understand who these people were in their own right rather than just as property of the college.

Jack was the first person purchased by South Caroline College (the name of the school before the Civil War), but he did not live his entire life in Columbia. Before being hired out to South Carolina College, Jack lived on the plantation of John Wallace, on the border of Laurens and Newberry Counties, some eighty miles to the northwest of Columbia. There, he was part of a community that included nine other enslaved people. When Wallace died, he divided up this community, giving Jack to his wife Amy. In his will, Wallace separated Jack from people he had lived alongside and formed bonds with—some of whom could have been his family members, and many of whom he would have formed strong relationships with.

In 1811, Amy Wallace hired Jack out to South Carolina College. Wallace used an intermediary, James Bostick, to manage Jack’s hire and collect payments from the college that for Jack’s labor. Hiring out presented enslaved people with the opportunity to mediate their condition. Rather than being owned by one person for whom they also worked, slaves who were hired out answered to different masters. While this presented the challenge of balancing interests, it also allowed enslaved people like Jack explore other means toward their own interests. At South Carolina College, Jack could do just that.

Despite its recent founding, life in Columbia looked very different from the life that Jack knew on the plantation. With a population of less than a thousand people when Jack arrived, the town showed sure signs of growth. Two key institutions played an important role in that development: the state government and the college. The decision to move the capital away from Charleston had necessitated the creation of a new city, a planned city with a grid street system at the juncture of the Broad and Saluda rivers in 1786, though it only became a town in its own right in 1805. The state legislature chartered South Carolina College in 1801, but it did not start offering classes until 1805.[1] From its earliest days of operation, the school planned to use enslaved laborers to assist in the school’s operations. The Board of Trustees of the college hired enslaved people to clean students’ rooms, cook meals, and complete other necessary tasks to keep the college running smoothly.

Jack’s job was different. He worked in the chemistry laboratory and cared for the “philosophical apparatus,” a set of instruments used for science experiments and demonstrations. According to the professor who he worked most closely with, Jack quickly became integral to the adequate functioning of the laboratory. Through the laboratory Jack developed specialized skills and an important working relationship with the chemistry professor, Edward Derrill Smith. During his earliest years at the school, Jack “acquired a tolerably good knowledge of this business and is enabled thereby to aid some of the Professors considerably in the Mechanical part of their duties.”[2] Smith worked hard to ensure that he would not lose Jack’s labor, writing letters to Bostick, the faculty, the Board of Trustees, and the Governor to keep Jack in the laboratory. When Jack’s owner decided to sell him at auction and Samuel Green, a local druggist and hotel owner, purchased Jack, Smith obtained Jack’s continued hire to work the laboratory. A year later Smith secured $900 of funding from the state legislature for the college to purchase Jack. By the end of 1816, South Carolina College owned Jack.

This change required Jack to reorient his life at South Carolina College. For many enslaved people purchase meant a change of location and the loss of friends or family, though for Jack this had occurred years before. Now he would have to renegotiate his relationship with the college. No longer did he have an outside party to turn to for redress of grievances, if needed. Instead Jack had to rely on his relationships within the college, primarily professors. The Board of Trustees gave the professors of the college the responsibility of determining Jack’s upkeep, which they did not discuss for almost a year. Finally, the faculty determined that Jack could hire himself out in order to pay for his room and board. This meant an increased burden on Jack’s labor, but also the ability to determine for whom he labored. Jack chose to work for the students. He hired out his time to undergraduates which brought him out of the Chemistry lab and provided him with opportunities to interact with the broader campus.

The extra work provided for Jack’s lodging, which likely changed throughout his time at South Carolina College. The Board of Trustees and faculty never explicitly described where Jack lived, though they make suggestions. At some point he probably lived on the campus. No known slave quarters existed during Jack’s time there, so he would have slept in another building on campus. Jack could have lived with Bostick, who managed his hire. Green, who briefly owned Jack, lived only two blocks from the college and had twenty-eight enslaved people living on his property during Jack’s time at South Carolina College. Wherever Jack lived, he now had to pay his own way.

Jack’s life shifted again when Smith decided to leave South Carolina. His replacement, Thomas Cooper, resented Jack’s ability to hire himself out to the students and saw Jack as a problem, calling him, “idle, careless, void of veracity, and of honesty.”[3] Cooper asserted that he needed the right to physically punish Jack, something that Smith had apparently never done. He even asked the Board of Trustees for permission to remove Jack from campus, hiring him out to someone else, a complete reversal from Smith’s persistent efforts to keep Jack in the Chemistry lab. This change drove Jack to find another mode of institutional support.

In the months after Cooper’s arrival, Jack sought membership at Columbia’s Presbyterian Church. Unlike many other churches in Columbia and across the South, Columbia’s Presbyterian Church had not made efforts to reach out to African American members. Jack’s impetus to join likely came from his desire to have connections outside the campus and his familiarity with the church from Smith, who had been a member. Jack’s bid for membership confounded the board of the church, which delayed a decision on his membership four times, stringing Jack along over the course of a year. Finally they consulted with the “principal officers” of the college, likely Thomas Cooper who had become president of the college in the year since. The school reported unfavorably upon Jack and the church denied him membership. Jack did not have the opportunity to gain membership in another organization. On March 4, 1822 the faculty of the college ordered $8.50 be paid for Jack’s burial.

Knowing Jack’s life requires more than a plaque. Understanding the true past of colleges and universities certainly means acknowledging their connections to slavery. More deeply though true awareness requires an examination of the lives of the people enslaved by the institution. Jack’s life mattered because he was a person, not just because of his benefit to the college. Today, the marker bearing his name frames him only as a value to the school, not in his own right. To do this requires reading institutional materials beyond the records of South Carolina College and asking questions of them that take the story of an individual person outside of the college itself and place them in a broader context within their community. For the University of South Carolina and Columbia, this means seeing how slavery connected the college and the town, as enslaved people had to navigate both.

Today, prospective students and families on tours of the university may or may not stop and read Jack’s name on its plaque, listed among many. But almost all tours visit the university’s main library, named for Thomas Cooper.

Jill Found is a Ph.D. student at the University of South Carolina. Her research looks at the lived experiences of enslaved people on college campuses.