We are taking a brief hiatus from our regular Tuesday Member of the Week feature. With the end-of-semester crunch and end-of-year celebrations in full swing, UHA members have their hands full with work and socializing–no need to burden anyone with more of it! In the spirit of the holidays, we instead bring you two pieces from the personal vaults of The Metropole‘s co-editors.

Tonight marks the beginning of the Jewish holiday of Hannukah. Three years ago, in the midst of my dissertation research, I spent a few hours on the first night of the holiday combing through all of the board meeting minutes, programs, flyers, newsletters, and oral histories I had gathered from the YM-YWHA of Washington Heights & Inwood looking for descriptions of Hannukah celebrations. This Jewish Community Center in Northern Manhattan became the central case study of my dissertation; I was (and continue to be) fascinated by the many ways New York City’s postwar fiscal crisis, demographic changes, and neoliberal renaissance played out within and around one small communal space. The changes in how the Washington Heights Y celebrated Hannukah between 1929 (the earliest records I have) and the late 1970s provide one small window into the evolution of American Jewish identity and the robustness of  sectarian urban institutions. 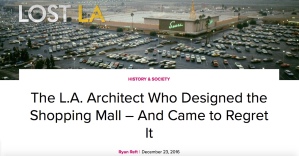 Christmas, meanwhile, is two short weeks away. For those who still prefer brick-and-mortar stores to online retailers, ’tis also the season of malls. For KCET last year, Ryan wrote about how architect Victor Gruen came to design the shopping centers that would go on to become ubiquitous in the American suburbs. Although Gruen pioneered the trend of mall development, he would eventually become a critic of his own retail architecture work.

We hope these offbeat historical takes on the holiday season provide respite from the harsh winter winds and endless stacks of grading. If there was such a thing as a secular blessing over history and historians, I think it would be this:

“I should like professional historians and, above all, the younger ones to reflect upon these hesitancies, these soul-searchings, of our craft. It will be the surest way they can prepare themselves, by a deliberate choice, to direct their efforts reasonably. I should desire above all to see ever-increasing numbers arrive at that broadened and deepened history which some of us–more every day–have begun to conceive.”