Late in 2016, the seminal hip-hop collective A Tribe Called Quest (ATCQ) was still reeling from the death of founding member Phife Dawg when the group released its final album, We Got it from Here Thank You for Your Service. Though completed well before the election that year, one could not help but listen to group’s final opus, which dropped after November 3,  without thinking about the current straights of Trumpian America: a nation awash in racial mistrust and populist demagoguery. “There ain’t no space program for” black people, Q-Tip raps in the chorus on the opening track, “you stuck here.” On the second track, “We the People“, A Tribe Called Quest didn’t back down, sarcastically telling listeners, “All you black folks, you must go / All you Mexicans, You must go / All you poor people, you must go / Muslims and gays, boy, we hate your ways / All you bad folks, you must go.”

In our current environment, everything feels relevant and political. For many Americans, particularly historians, the past eighteen months have only confirmed the belief that the nation needs to better grasp its past. The Washington Post‘s “Retropolis” and “Made by History” columns, the latter of which has featured more than a few UHA members, attest to this broad yearning for, dare we say, historical facts. So it follows that the UHA would like to draw your attention to some of the best work in urban history published this past year. To borrow from an ATCQ classic, “We on award tour with Muhammad my man/Going each and every place with a mic in their hand.” Get on the tour bus with The Metropole and be sure to get your mics out because everyone needs to hear the history therein; after all, as ACTQ comrades De La Soul once noted, “Stakes is high“. 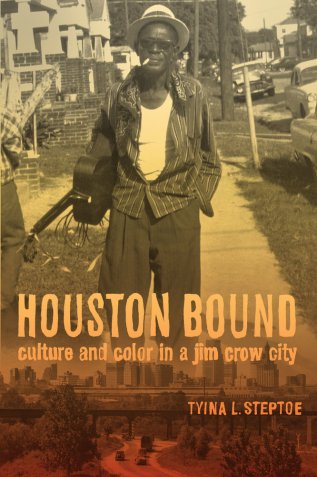 At first glance, Tyina L. Steptoe’s book, Houston Bound, is an unassuming book – ostensibly about one city and one moment at the turn of the century. Upon close reading, however, it becomes obvious the book is so much more: Steptoe offers richly hued depictions of everyday life for diverse communities of migrants, Creoles, Mexicans, African Americans, and more. She uncovers volatile processes of racial formation but always through the experiences of everyday folk living in specific places. And she brings together surprisingly eclectic topics into a riveting story of Houston spanning over a century: starting with a spatial history of slavery, Steptoe moves through Jim Crow urbanism, environmental changes and migrations, the evolution of racialized police practices, and mid- to late-twentieth century politics – all while emphasizing the music that gave voice to community and culture. The result is phenomenal: Houston Bound is at once intellectually rigorous and accessible, provocative and a pure pleasure to read. 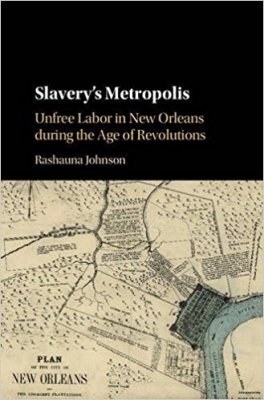 Slave economies fueled urban growth and the evolution of most – perhaps all – American cities in the late 18th and early 19th centuries. Rashauna Johnson’s book, Slavery’s Metropolis, carefully maps this history for New Orleans from 1791 to 1825, and in the process offers insights into the urban geographies of empire, race, and power. Johnson persuasively argues that enslaved peoples moved through transnational and global spaces while also being profoundly unfree. This “confined cosmopolitanism” is at the core of the book’s explanation of urban racial order, and it is a weighty contribution to our collective understanding of slavery and cities. Johnson’s impressive archival work and solid grounding in theory make this a masterful book on all counts.

With Cities in Motion, Su Lin Lewis captures a transformative historical moment of international cosmopolitan culture through close examinations of Rangoon (Myanmar), Penang (Malaysia) and Bangkok (Thailand) in the 1920s and 1930s. The cosmopolitanism of the book’s subtitle is both European and a continuation of a millennium of exchange between the Indian Ocean and the South China Sea. Lewis examines cosmopolitan cultural exchanges as vehicles for intricate and multifaceted negotiations of power within and between communities that are anything but insular or homogenous. In this, she builds upon and respectfully corrects the foundational work of J.S. Furnivall and Benedict Anderson, adding a richness to the struggles of class, gender and religion. She manages to better capture the complexity surrounding questions prematurely settled in histories driven by postcolonial and national framings. The sudden proliferation of print and other new media provides a thrilling set of important vehicles for examining negotiations of power between a Babel of linguistic communities. Throughout, some of the clearest evidence of modernity comes in the form of the new roles, public expressions, and vocal presence of women. Lewis is most impressive in her capacity to pursue the evidentiary trails within and between these three cities along the centrifugal trajectories that they shared with Singapore, Batavia (Indonesia), Manila (Philippines), British India, Shanghai, and beyond to Cairo, London, and Paris. Perhaps the most striking episode of the book takes place in adjacent neighborhoods of 1920s Paris, where the founding fathers of Republican China, Vietnam, Burma, and Thailand debated the futures of the region, even entertaining a pan-Southeast Asian state. Cities in Motion is an exemplary demonstration of how we might move toward more inclusive global histories while remaining grounded in local historical evidence.

Arnold Hirsch Award for Best Article in a Scholarly Journal, 2016

Kathryn Sloan deftly illuminates the relationship between urban space and public suicide in the rapidly urbanizing environment of 19th-century Mexico City. Her analysis of newspaper accounts reveals how spectacular narratives surrounding suicide enabled reporters to regale the public with “lessons on honor, proper education, the roots of insanity, and gender ideology” (412). Editors trafficked discourse that refracted bourgeois anxieties about urbanization to the benefit of the autocratic Porfirian government. Public suicides, especially when in the name of nationalist love, honor, or passion, visibly empowered victims who had been largely disenfranchised in life. The symbolic associations these narratives took in urban spaces helped encourage popular placemaking while Mexico City incurred significant migration from rural communities. This article reflects the power of mass media to formulate popular understandings of public space—even concerning the most tragic of personal events.

Michael D. Pante’s article on flood control in Manila provides a detailed account on how the modernization of water management infrastructure was wielded to further the authoritarian goals of the Philippine government. The continual inadequacy of water management infrastructure resulted in repeated flooding that most seriously impacted marginalized communities within metropolitan Manila. Furthermore, members of these communities were continually relocated to make way for new infrastructure to replace the previously inadequate installations. Pante clearly elucidates how flood policy has exacerbated spatial and social inequalities when exercised by authoritarian forces.

Accumulating Risk by Josiah Rector brings together environmental history, the history of capitalism, and the history of race, class, and gender inequalities to show how Detroit’s economic transformation has concentrated environmental risk in poor urban neighborhoods. Rector expertly investigates large structures like capitalism, deindustrialization, and neoliberalism while also focusing the lens on human actors like regulators, business leaders, public officials, workers, union leaders, and city residents. His extensive research blends materials from the national archives with local collections in Michigan, oral history interviews and government reports, to create a rich and compelling narrative.

While many urban histories of Detroit focus on the post war period, this dissertation extends the traditional periodization by locating the origins of Detroit’s environmental crisis in the late nineteenth century. Nonetheless, the work is of current relevance, with immediate implications for our contemporary crises in the wake of the subprime mortgage meltdown, the lingering economic emergency in Detroit, and the poisoned water in Detroit and Flint. Rector doesn’t shy away from weighing in, using historical perspective, on current proposals for how to solve these crises in Detroit. This dissertation shows the importance of historical research and historical imagination when trying to understand our current economic and environmental problems.

Consumable City by Theresa McCulla offers a refreshing approach to the hybrid racial culture of New Orleans, examining the experience of race and ethnicity through food. Tracing a long history from the nineteenth century to the present day, the project explores the contested meaning of ‘creole,’ showing how African American workers were exploited to produce the celebrated food culture of New Orleans even as the tourism and food industries worked to exclude or deny their presence and their cultural knowledge. McCulla effectively deploys a mixed methodological approach, using a unique blend of sources such as cook books, souvenirs, and market stalls as embodiments of social structures. Her creative interpretive approach takes risks to speculate on the meaning of cultural phenomena around food and to understand the often unspoken and invisible assumptions of racial hierarchy.