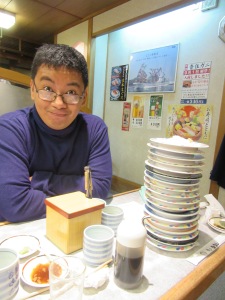 My current research deals with the history of Quezon City, especially in terms of its evolving social geography throughout the twentieth century. I was drawn to this topic primarily because of my affinity to the city: I was born, grew up, studied, and am still living and working in Quezon City.

I teach Philippine History courses, and my research plays a big role in how I present this subject to my students. Although I can’t devote a significant part of the syllabus to teaching Quezon City’s history as a specific topic, the historical forces that have defined this city are the same things that I emphasize in my lectures: the emergence and eventual decay of socioeconomic structures, agrarian conflict, urbanization, sociospatial transitions, state-society relations, etc.

I am excited about the ongoing “urban turn” in Philippine studies. More and more scholars are engaged in identifying Philippine cities and the Filipino experience of cities as critical factors that shape society. Such is true not only in the field of history, but in other social science disciplines as well. There’s a wave of new books from both established scholars, like Daniel Doeppers’s Feeding Manila in Peace and War, 1850-1945 (University of Wisconsin Press, 2016), and up-and-coming academics, like Wataru Kusaka’s Moral Politics in the Philippines: Inequality, Democracy, and the Urban Poor (NUS Press, 2017), and I hope I can also make a contribution to the field in the near future.

There’s no substitute to experiencing the city, seeing first-hand its unexplored corners, uncovering its faults, and especially interacting with the people who make its existence possible on an everyday basis. I don’t think scholars of urban studies who do so will ever run out of new stories and insights.

What was it like to travel by car or other transportation through Manila during the American Colonial period? Is it better or worse now?

Many present-day Filipinos look back to the early decades of the twentieth century with nostalgia, thinking that that period was a sort of golden age for city living, including congestion-free streets. However, traveling by car through Manila during the American colonial period (1898-1935) was already quite a hassle even then. Traffic congestion in the central business district of Binondo was such an everyday occurrence that officials had to implement rerouting and one-way schemes to solve the problem, only to see these solutions give birth to other problems. Of course, the situation was better then, but only in terms of the limited geographical scope of traffic congestion. Before, people only had to contend with Manila’s traffic situation; now, the 12 million residents of Metro Manila experience the same situation but in a greater, metropolitan scale.