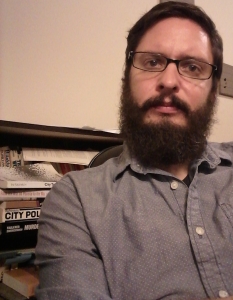 I am currently finishing my first book. It is a study of post-World War II Philadelphia and the blue-collar supporters of 1960s police commissioner turned 1970s mayor, Frank Rizzo. The book examines white, blue-collar Philadelphians’ engagement with the politics of law enforcement, education, employment, and housing and traces the establishment of an urban, class-conscious variant of populist conservatism. I came to the project for a number of reasons. The first is because I was born and raised in Philadelphia. I had long known of Rizzo’s reputation, but never really thought about it in a broader context until graduate school. I didn’t initially set out to write a dissertation on my home town, but I took a seminar on Conservatism in the Modern United States that piqued my interest. I also thought I recognized a gap in the literature. The majority of the urban history books we read in that seminar covered the Sunbelt or Suburban communities in the South and West (think Lisa McGirr, Becky Nicolaides, Matthew Lassiter, Kevin Kruse, Robert Self, etc.). These were all great books, but they didn’t seem to account for the kinds of urban conservative politics I was familiar with at home. I quickly decided to change my dissertation topic and spent the next few years chasing resources from the white, working- and middle-class neighborhoods that provided Frank Rizzo with his most enthusiastic support. Years later, the book is now under contract with the University of Pennsylvania Press under the title Blue-Collar Conservatism: Frank Rizzo’s Philadelphia and the Politics of the Urban Crisis.

I just finished my second year at the University of South Alabama. In addition to my modern US survey courses, this past year I also taught a writing seminar on post-World War II US history and a research seminar on 20th century US History. In the next academic year I will offer an honors class on American urban history called “The Urban Crucible: Cities and Suburbs in Modern America” and another course on America in the Sixties. All of these classes relate to my scholarship in a number of ways. My post-1945 US, urban history, and Sixties classes all take up the intersecting themes of race, class, and American political development that I write about in my book. I also try to integrate bits of my research into every class I teach, from surveys to research seminars.

Since you’ve already given me the space to make a shameless plug about my own book, I will say that I’m most looking forward to (finally) reading Ansley Erickson’s Making the Unequal Metropolis. It’s been on my to-read list for a while, but the recent controversy over the book’s treatment by the American Historical Review has reinvigorated my interest. I had actually chosen the book as one of my course readings in my upcoming urban history class well before the AHR review came out, so now I’m really looking forward to figuring out how I’m going to incorporate it into the class.

Be flexible. Be flexible with your research, with your reading, with your writing, and with your career path. Urban history/studies is a growing field with a lot of possibilities, but young scholars shouldn’t let it also be a limitation. I think the flexibility to read across specialties and disciplines, to publish in different forums, and to research beyond what we usually consider urban history are important parts of scholarly development and maturation. I didn’t start out doing urban history; my research took me in that direction. It also helps to be flexible in where young scholars think they can do urban history. I’m pretty sure there was never a point when I was growing up in Philly, or at any point thereafter, that I told myself that I wanted to end up in Mobile, Alabama. But I remained open to different possibilities and followed them when they opened up. Now I’m lucky to be forging a career at a good university, with great students, and excellent colleagues.

What museum or historical site would you recommend to urban historians visiting Mobile, Alabama?

First of all, more urban historians need to visit Mobile, Alabama, where I’d be happy to show them around when they get here! We have a really good museum in the History Museum of Mobile. For those interested in the city’s architecture, I would direct them to some of Mobile’s historic neighborhoods like the Oakleigh Garden District, De Tonti Square, and Church Street East Historic District. I would suggest they visit Africatown, which is the community built by the last group of African slaves captured and brought to the United States, illegally smuggled in through Mobile Bay in 1860. And, finally, I wouldn’t want an urban scholar to leave without touring Mobile’s lively and growing downtown entertainment district. Like a lot of cities, Mobile’s downtown suffered from disinvestment and decline in the late 20th century, but a concentrated effort in the last decade or so began rejuvenating the area. Current planning documents call for future redevelopment that should allow for more walkability, bikeability, and green spaces. All in all, downtown Mobile offers urban scholars and students an excellent opportunity to see urban renewal in action.